Red Dead Redemption 2 will bring your PC to its knees

Red Dead Redemption 2 is going to be one of 2019's most demanding PC releases, even without any form of raytracing. Rockstar has decided to take the Crysis approach to PC development, building upon Red Dead Redemption 2's already good looking console versions to create something that future hardware generations can aspire towards.

We plan to release a detailed optimisation guide for Red Dead Redemption 2 in the coming days. This is where we will let you all know which settings to adjust for higher framerates, a which settings you will be able to max out without any major performance dips. 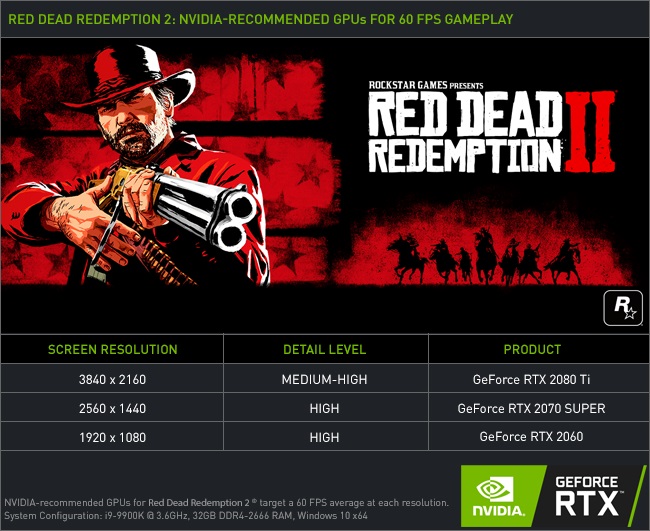 Nvidia has also confirmed that Red Dead Redemption 2 will feature a built-in benchmark on PC.

You can join the discussion on Red Dead Redemption 2's PC version on the OC3D Forums.

NeverBackDown
Not that I would know since the game isn't out, but they could also just be recommending their RTX line as it's more expensive.

Though I suppose the performance gap between the 2060 and the 1660ti is big enough to mean it probably won't hit 60fps at 1080p. Which is sad. The recommendations here showcase how badly optimized the game is more than having next-gen graphical features imo.Quote

WYP
Quote:
The combination of higher settings and the console versions aiming for 30FPS can do a lot to the game.

Even if you consider a Xbox One X to be equivalent to a GTX 1070, you still need 2x that for 4K 60. Add on higher settings and features and it is easy to see why an RTX 2080 Ti can't do Ultra.Quote

NeverBackDown
It shouldn't be linear though. They should be putting in the work to better optimize and take advantage of newer architectures. 4k60 sure is fine for needing higher tier cards. Been that way for years, but for lower resolutions, you shouldn't need to spend $350 to hit 1080p60. A few years ago a $200 and lower card would be able to do this.

They are a multi-billion-dollar company, there's really no excuse especially considering they delayed the PC version over a year and they most definitely started this during the console development as well.Quote

WYP
Quote:
I'm expecting Medium settings to look pretty good. We will see when the game is out. I expect RDR2 to be like Control and look pretty great at low and better at higher settings.

The recent PC demos for the press were 4K med/high and that got a great reception.Quote

ImprovizoR
It's been ages since I've seen any truly discernible visual difference between high and ultra settings. A game like RDR2 will undoubtedly look great even at medium/high.Quote
Reply