Respawn pulls Titanfall from sale, but the game will live on

Titanfall isn't dead, but its lifespan is limited

It's the beginning of the end for Titanfall, as Respawn Entertainment has decided to remove the game from sale on all platforms, preventing new players from accessing the game. While Respawn has confirmed that the game's servers will remain online, this is undoubtedly the newest nail in Titanfall's coffin.

As a multiplayer-only shooter, it made little sense for Respawn to sell the game indefinitely. The game has a sequel and a lot of the Titanfall can be seen in Apex Legends. It was inevitable that Titanfall would be removed from sale, it was only a matter of when.

Respawn did not give gamers a specific reason why Titanfall was removed from retailers and game subscription services, but it is likely due to server maintenance issues, recent DDoS attacks, and a lack of new game sales. It is likely that we will hear about the closure of Titanfall's servers within the next year.

Within their announcement, Respawn repeatedly stated that Titanfall is part of the studio's DNA, and that the Titanfall universe will continue "in the future." Perhaps Titanfall 3 is in the works?

For now, Titanfall fans can still "drop into a match", but today it seems clear that Titanfall's days are numbered.

You can join the discussion on Titanfall being removed from sale on the OC3D Forums. 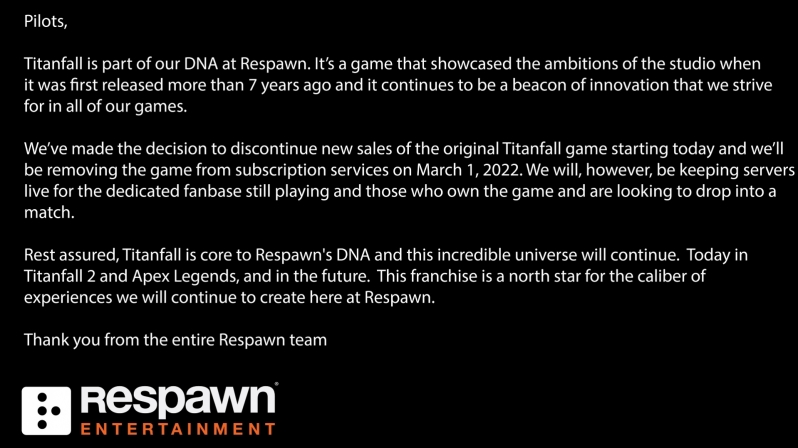 Damien c
I loved Titanfall but they just didn't do enough with it and then the 2nd one for me was not really that good.

It needed a 3rd game with more depth to the Story and larger player numbers per match with other changes for me.

Titanfall is what made me get a Xbox One which then led me to Destiny which has been a obsession since release!!Quote
Reply