RPCS3 has been updated to detect AVX-512 support on Zen 4 CPUs, promises a major performance boost

AVX-512 support is a big deal for emulators

RPCS3, the PlayStation 3 Emulator, has been optimised for AMD's new Zen 4 processors

Starting tomorrow, AMD's Ryzen 7000 series processors will be available to consumers, offering support for AVX-512 instructions to AMD users for the first time. While most consumers are not excited about AMD's addition of AVX-512 support with their new Zen 4 CPU cores, fans of emulators are excited to see the feature gain more widespread adoption, especially now that Intel has disabled support for it with most of their Alder Lake processors.

The RPCS3 PlayStation 3 emulator utilises AVX-512's feature set to accelerate a lot of its codebase. With AVX-512 support, RPCS3 can run games at higher framerates and deliver gamers a smoother overall experience. This extra performance can be used to run a lot of classic games at 60 FPS or 120 FPS on PC, which is a big deal given the fact that much of the PlayStation 3's library is designed to run at 30 FPS. 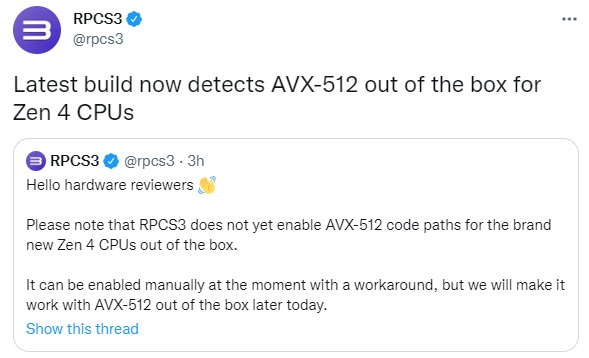 Console emulators are designed to replicate the behaviour of classic gaming systems, allowing games from these systems to be played using modern hardware. The world's supply of classic consoles is dwindling, and that means that long-term, gamers will need to rely more and more on emulation to play classic games, as their original consoles will eventually fall into disrepair or get thrown away.

AVX-512 code has been used by the developers to multiple emulators to help mimic the functions of classic gaming hardware in the fastest way possible. Using other codepaths, the same tasks can be completed in CPUs that do not support AVX-512, but completing the work in this way can often take many more CPU clock cycles to complete. This makes affected emulation code run slower and can impact the framerate at which games play at. This is why AVX-512 is important to RPCS3, and why it is important for many other emulators.

Now that AVX-512 is supported by AMD's mainstream Ryzen processors, it is likely that AVX-512 code will be utilised by more software and emulators moving forward. Previously, AVX-512 support was limited to a relatively small range of Intel processors, but with Zen 4, AVX-512 should become available everywhere within AMD's Ryzen lineup.

You can join the discussion on RPCS3 gaining support for AVX-512 support on AMD's Ryzen 7000 series processors on the OC3D Forums.