Like many modern PC games, Skull and Bones is intended to be played on an SSD

Is your PC Ready for Skull and Bones?

Skull and Bones is coming to PC and consoles on November 8th, finally giving gamers access to Ubisoft's long-awaited pirate game. At Gamescom 2022, Ubisoft released Skull and Bones' new PC Features trailer, confirming many of the PC-excusive features that will be available in the game at launch.

On PC, Skull and Bones will release with an uncapped framerate option, multi-monitor/Ultrawide screen support, HDR/SDR options, both DLSS and FSR (1.0) upscaling, advanced input options, and ray tracing in the form of ray traced global illumination.

Like many modern PC games, Ubisoft's Skull and Bones has listed SSD storage as part of the game's minimum system requirements. With both Xbox Series X/S and PlayStation 5 consoles featuring SSD storage, future games will be designed around the storage performance offered by SSD-based storage mediums. Soon, mechanical hard disk drives (HDDs) will not be fast enough for modern games, and changes like this to game system requirements confirm this.

Below are Skull and Bones' full PC system requirements for PC. 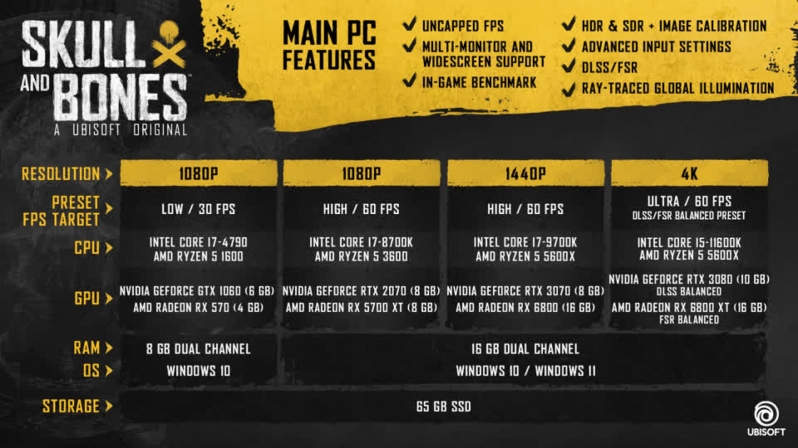 hardware configurations for every pirate

Players of Skull and Bones can expect a series of familiar, in-depth graphical settings to tailor their experience to their systems. Furthermore, we believe everyone should sail the high seas, which is why we offer multiple additional options, that we will explore later.

- While the GPU and CPU are very important, they must be paired with at least 8 GB of DDR4 RAM running in Dual Channel configuration. Of course, the world of Skull and Bones, with all the ships and piracy you can expect, requires at least 65 GB of space on your SSD.

- Finally, for the fair few aiming for 4K60 at Ultra settings, your feat is gargantuan, but DLSS and FSR come to your aid! In our testing, stable 60FPS is achievable by using DLSS or FSR on their Balanced Presets, with the following minimum specs: Intel I5 11600K/AMD Ryzen 5 5600X and Nvidia RTX 3080/AMD RX 6800XT, together with 16 GB or RAM.

You can join the discussion on Skull and Bones' PC features and system requirements on the OC3D Forums.