It looks like Rebellion's Sniping classic is getting re-released.

A remastered version of Sniper Elite V2 has been revealed by the Australian game classification board, receiving its classification on December 24th. According to the listing, the game will be a multi-platform title and feature a 15+ rating in Australia, featuring mild language, strong violence and very mild nudity.

Sniper Elite V2 was released in 2012 on PS3, Xbox 360, PC and later Wii U, with the game's re-release likely coming to PC, Xbox One and PS4, though a Nintendo Switch version is not out of the question. The re-released will likely bring with it higher gameplay resolutions on modern platforms and updated visuals, likely in the form of higher resolution textures or enhanced shadows/lighting.

Sniper Elite V2 was also famous for its standalone Sniper Elite: Nazi Zombie Army expansion, which released exclusively on PC. This 1-4-player co-op game offered a level structure that is similar to left 4 dead, and V2's remaster would act as an ideal opportunity to bring this multiplayer game to consoles. 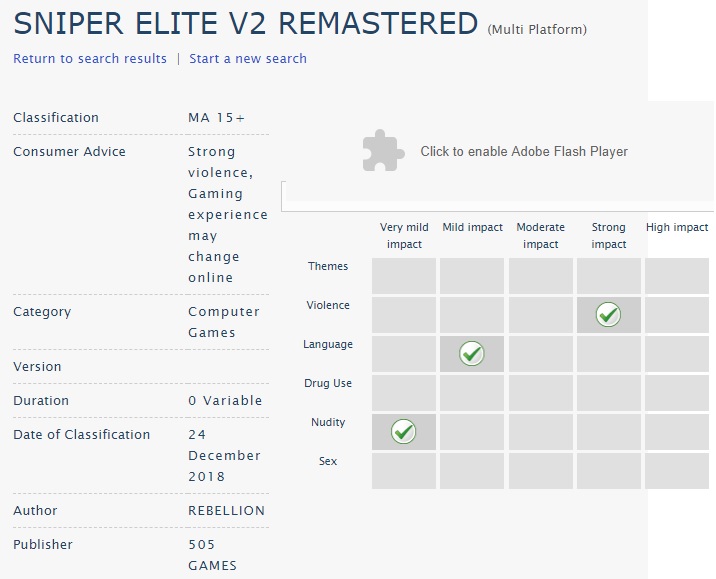 Sniper Elite V2 is centred around Germany's V-2 rocket programme, with players taking the role of an American OSS agent who is tasked with recruiting Nazi scientists in the closing days of World War II, taking on both Nazi and Soviet forces in the process.

You can join the discussion on Sniper Elite V2's planned remaster on the OC3D Forums.

ImprovizoR
I hope they get rid of respawning enemies. That was the only thing that held it back from being a great game back in the day.


I would still like a remaster of the first game, though.Quote

TheF34RChannel
Loved 4 and now wish for a modern day title; too much WW2.Quote
Reply