Sony confirms VRR is coming to PlayStation 5 in "coming months"

VRR support is coming to PlayStation 5, and that's a big deal for the console market

Variable Refresh Rate technologies are a big deal for gamers, allowing compatible displays to dynamically sync the refresh rate of their screens to the graphical output of compatible PCs and consoles. This allows games to be displayed with no screen-tearing, minimal visual artefacts, no frame pacing issues, and minimal display latencies.

With VRR, games will also no longer be forced to render to static 30 FPS or 60 FPS framerate targets, targets which are mandatory in most modern games due to the commonality of 60Hz TVs and monitors. With VRR compatible screens and gaming systems, gamers and developers can target different framerates, and the consequences of framerate dips below those targets are minimised. In theory, games that target 30 FPS or 60 FPS could run at higher framerates on VRR screens when there is any headroom, giving a smoother espereince to VRR TV/monitor users.

VRR is coming to PlayStation 5

Sony has confirmed that a future firmware update for PlayStation 5 will add VRR support to the system for those with compatible HDMI 2.1 TVs or monitors. Existing PlayStation 5 can be patched to support VRR, and future games may launch with VRR support on day-1.

On PlayStation 5, a VRR setting will also be available that will apply VRR support to unsupported PlayStation software. This may result in unexpected issues in some games, but for others, it will deliver the benefits of VRR without a game patch. 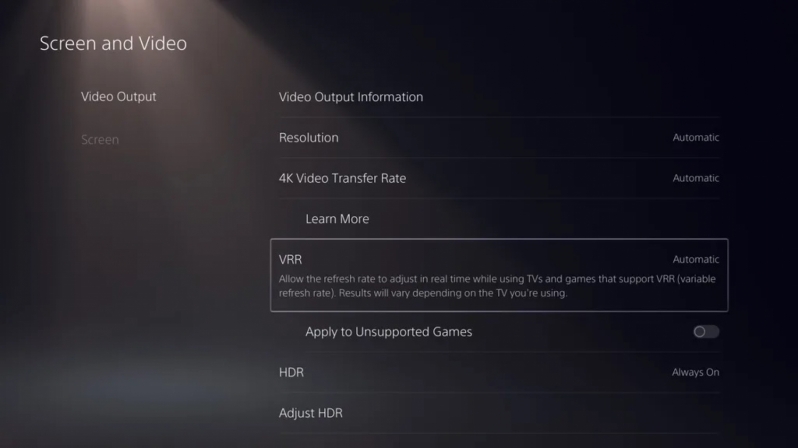 Why VRR support on PS5 is important

When PlayStation 5 gains support for VRR in the coming months, both Xbox Series X/S and PlayStation 5 will officially support the feature. This will make HDMI 2.1 VRR compatible screens a lot more appealing to consumers, and that will force developers to create future titles with VRR in mind.

PC gamers have benefitted from VRR support for years, and soon console gamers will be able to access those same benefits. That said, the commonality of 60 Hz TVs will force developers to continue targeting 30 FPS and 60 FPS framerates for the foreseeable future.

You can join the discussion on Sony's plans to support VRR on PlayStation 5 on the OC3D Forums.

grassman
Now all we need is Dolby Vision and Atmos.Quote