Expect to pay more for Spotify in June

Spotify has started to send emails to their customers to announce that the company will be increasing its prices this June, raising the cost of the streaming service's subscriptions by £1-£2 in the UK and €1-€3 in Europe. New subscribers should see this change at the end of this month.

US customers will only see increased pricing for Spotify's Family tier, which will see its cost increase from $14.99 to $15.99. In the UK and Europe, pricing adjustments will be seen in the company's Student, Duo and Family packages. Spotify has justified these changes by stating that it will help the company continue delivering "new content and features". The company's individual subscription tier should maintain its £9.99 pricing in the UK. 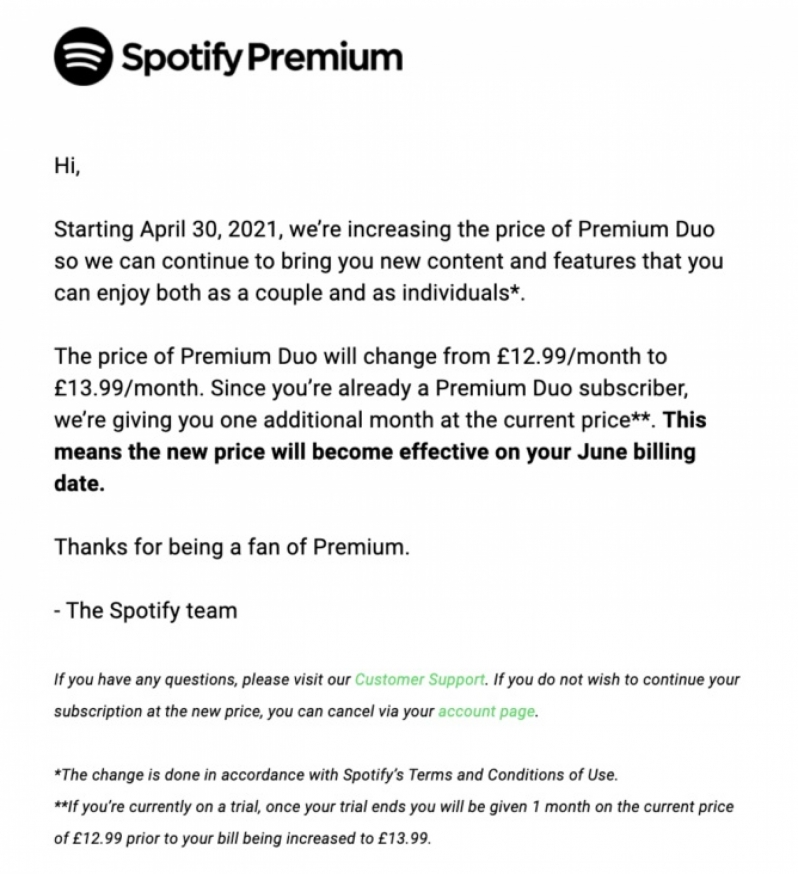 You can join the discussion on Spotify's UK/EU price increases on the OC3D Forums.

Dark NighT
Oh this wont affect me to much, single account sub through my isp with it being 1 euro cheaper per month then directly through spotify, all good here.Quote

Warchild
I swapped to Tidal sometime ago. So good luck to spotify.Quote

Damien c
Don't use any Music streaming service, I just buy the music and then play it on my phone or through my Plex Server.

That way I don't have to deal with price increases, loss of service when I lose internet etc.

My sister does use Spotify though and she has already said she may look at cancelling and just buy the music herself.

I have told her to do it, because it works out cheaper overall if you are just listening to about 10 albums mainly, plus there is YouTube as well.Quote

Dawelio
Quote:
You do know that you can download your playlist on Spotify and listen to it offline? Ie, even if your internet goes out?...Quote

AngryGoldfish
Quote:
Does Tidal have the same selection? I don't like Spotify but I don't know what else to use.Quote
Reply