Starfield and Redfall have both been delayed - Bethesda Confirms

Redfall and Starfield have both been delayed until 2023

Bethesda Softworks has confirmed that both Redfall and Starfield have both been delayed until the first half of 2023. Arkane Austin, the team behind Redfall, and Bethesda Game Studios, the developer behind Starfield, both need more time to polish their games, ensuring that both games have a better launch.

With Cyberpunk 2077 being a recent example of what happens to games that are released too early, Bethesda appears to be giving their studios the time they need to complete their projects to their satisfaction. Bethesda hopes to showcase gameplay for both Starfield and Redfall soon, likely during June 12th Microsoft and Bethesda Games Showcase (more information is available here). 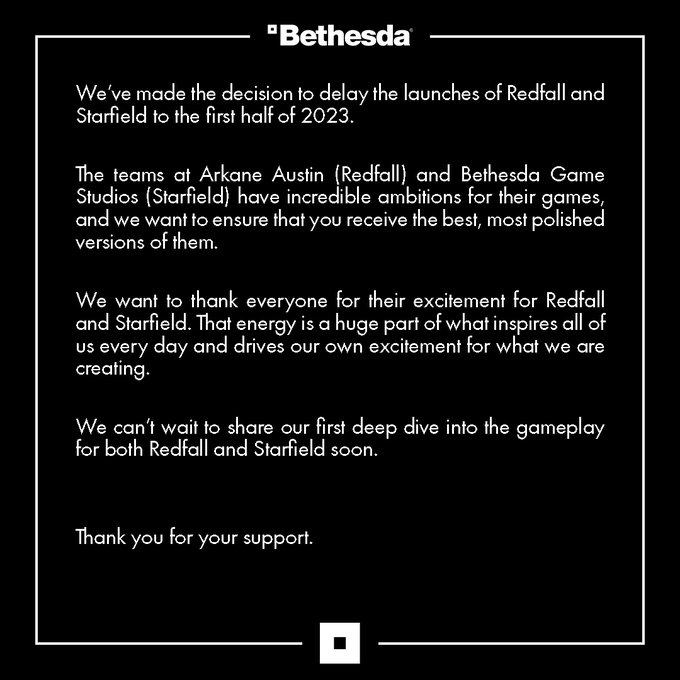 Bethesda Game Studio's Starfield will be the company's first AAA single player RPG since the release of Fallout 4 in 2015. The game is based in a future where space travel is possible, though at this time little is known about the game. Starfield will feature a heavily upgraded Creation 2 game engine that is designed to take advantage of next-generation hardware, with the game arriving exclusively on Xbox Series X/S and PC.

Redfall is an open-world co-op FPS where players fight against vampires who have taken over the area. Players can control one of four characters, each of which has unique abilities and backgrounds. The game takes place in Redfall Massachusetts, where players will need to fight against humans and vampires alike.

You can join the discussion on Starfield and Redfall being delayed on the OC3D Forums.