Steam has achieved concurrent player counts of over 23 million, a new record

Steam has achieved concurrent player counts of over 23 million, a new record

Thanks to the ongoing Covid-19 crisis, more and more people are working from home or isolating themselves, leading to record numbers of people using internet services to media consumption, communication and gaming.

Now, Valve has reached a new concurrent player record on Steam, reaching past 23.4 million players. Remember that Valve broke past 20 million players two weeks ago, a fact that makes this achievement all the more astounding. Valve favourites like Counter-Strike: Global Offensive is now reaching peak concurrent player counts of over 1.1 million, while other popular titles like Monster Hunter: World, Destiny 2 and GTA V have also reached higher than usual player counts.

As the Covid-19 crisis increases in severity across Europe and the Americas, it is possible that Valve's player counts will increase further. More and more workplaces are temporarily closing down or adopting a work from home strategy, a move which will no doubt lead to increase internet usage.

Valve has increased its peak player counts by over 15% in two weeks, and only time will tell if this trend will continue in the coming weeks and months. 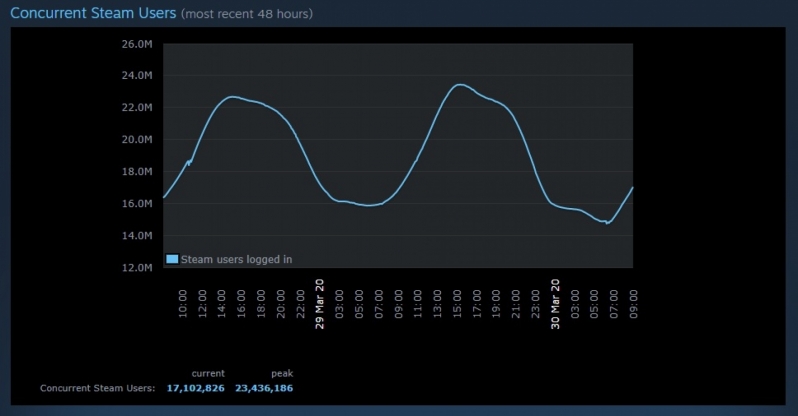 You can join the discussion on Steam hitting user counts of over 23 million on the OC3D Forums.