Steam's playerbase is growing at a record rate

Steam's usage has skyrocketed over the weekend, allowing the PC gaming platform to reach all-new heights when it comes to concurrent players. Yesterday, over 24.8 million PC gamers were using Steam at the same time, smashing the company's existing records.

With the release of Cyberpunk 2077 and the recent launch of Apex Legends on the platform, more and more PC gamers have a reason to use Steam. Yesterday, over 1 million PC gamers were playing Cyberpunk 2077 on Steam, and over 100,000 PC gamers were playing Apex Legends. Add on the recent onset of new Coronavirus lockdowns in many regions, and it's easy to see why Steam has been having a record-breaking weekend.

While Cyberpunk 2077 had over 1 million concurrent players yesterday, the game was only able to take Steam's number 2 spot, with Counter-Strike: Global Offensive maintaining its position as Steam's top game with last night's concurrent player count of 1,062,017.

Cyberpunk 2077 released on PC through Steam, GOG and the Epic Games Store, making the game's concurrent player count higher than what Steam has reported. Valve can only count how many Cyberpunk players were playing the game on Steam, though it is likely that Steam was the most popular storefront for the title. 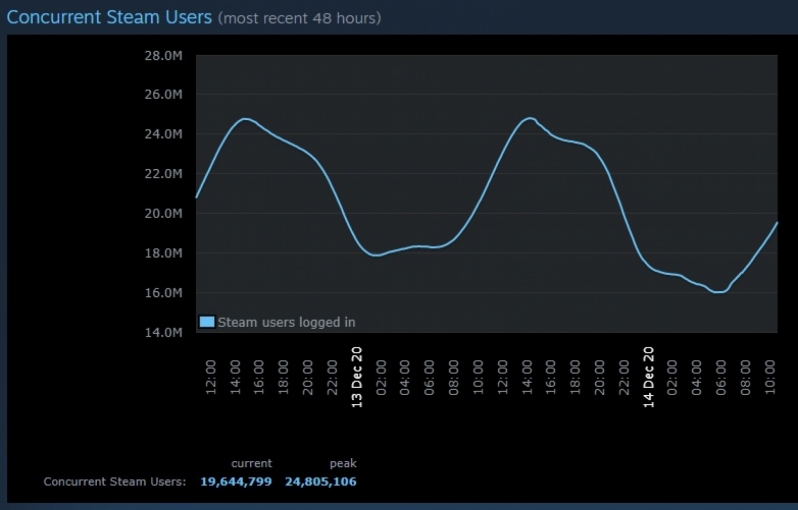 You can join the discussion on Steam hitting user counts of over 24.8 million on the OC3D Forums.