With just a handful of days left until The New Year, we're excited to look back at some of 2021's top sellers, most-played games, new releases, and more! As with previous years, we've organized several Best Of lists that each showcase how great 2021 was for players, developers, and all of the games in between. Before we see what 2022 has in store, let's look back at the Best of Steam - 2021.

As you've probably noticed by now, the Steam Winter Sale is in full swing, with 1000s of discounts across the store. So if you're looking for a sale on the best games of the year, we recommend browsing some of these lists! For anyone jumping straight into the lists, we recommend reading the notes at the bottom of this page, which explain some of the technical criteria for how the lists are generated.

The Top Sellers list is exactly what it sounds like - a look at the 100 games earning the most revenue on Steam during 2021. To get the total revenue, we look at game sales, in-game transactions, and DLC sales for every app on Steam from January 1st, 2021 through December 15th, 2021.

Being the sixth time we've organized the yearly Top Sellers list, it's quite interesting to look back and see which games have become perennial champs, while also perusing the brand new hits that smashed their way to the top.

In terms of titles new to this list, 2021 was a good year for games making their debut in both the Platinum category as well as the list overall. Six games made their debuts in the Platinum category this year (New World, Valheim, NARAKA: BLADEPOINT, Apex Legends, Battlefield 2042, and Dead by Daylight), with more than a third of the entire list being comprised of first-time Top Seller appearances. Many of these debuts are new releases for 2021, but a handful of older titles also cracked into the top 100, thanks to continued passion from their developers and dedicated community support from players.

Meanwhile, many of the perennial leaders continued to enjoy success on Steam. Dota 2, CS:GO, and Grand Theft Auto V all remain in the Platinum category for the sixth-straight year, which comes as no surprise to the passionate fans that launched these games throughout 2021. Five-time appearances in the Platinum category include PUBG: BATTLEGROUNDS and Tom Clancy's Rainbow Six Siege. A special shoutout to Destiny 2 as well, which has made the Platinum three years running since its Steam release in 2019. 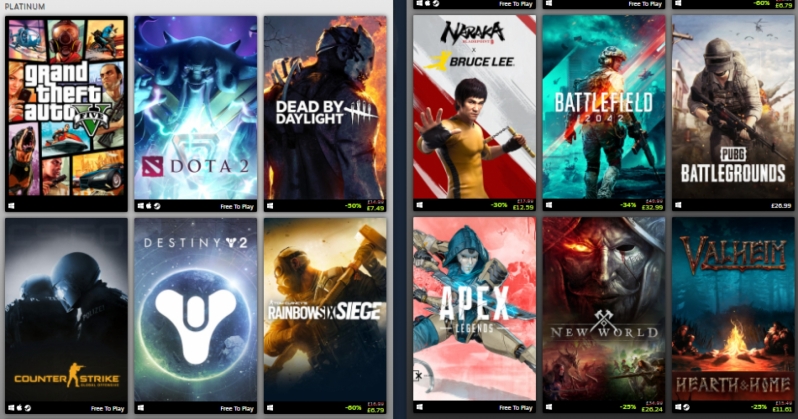 If you follow Steam posts throughout the year, you may have seen monthly lists highlighting the Top 20 games released each month throughout 2021. We've assembled those lists in one handy spot, but have also generated a top 25 list of new releases looking at the entire year. The list is created by looking at the thousands of game releases of 2021 and showcasing the Top 25 based on the revenue they generated during the first two weeks following their launch.

For last year's New Release list, we looked at which months were the most represented in the yearly Top 25. We thought it would be interesting to do that again and see how they compare. Similarly to last year, the autumn season includes a concentration of hugely successful top releases, with a bit of a lull in games during the winter months. 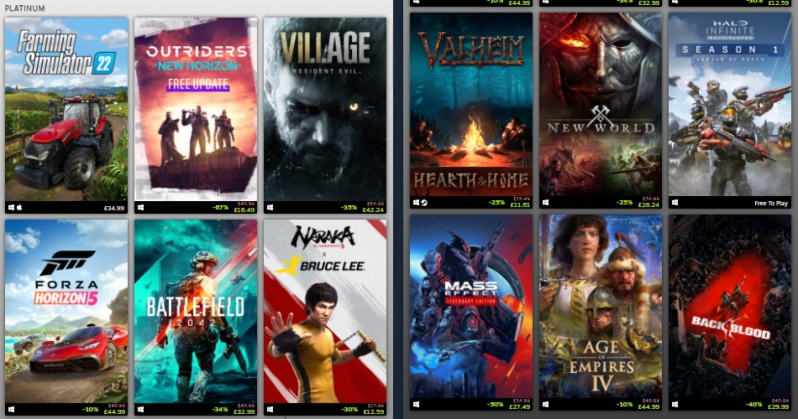 Early Access continued to be a popular development model on Steam throughout 2021, with well over 1000 games launching with it during the year. But this list is about the graduates, who have all come a long way from their debuts. Some of them made quick progressions through their Early Access milestones, while others steadily progressed through years of development. Although each has a unique path and story, they all stand as shining examples of the amazing games that Early Access can produce. 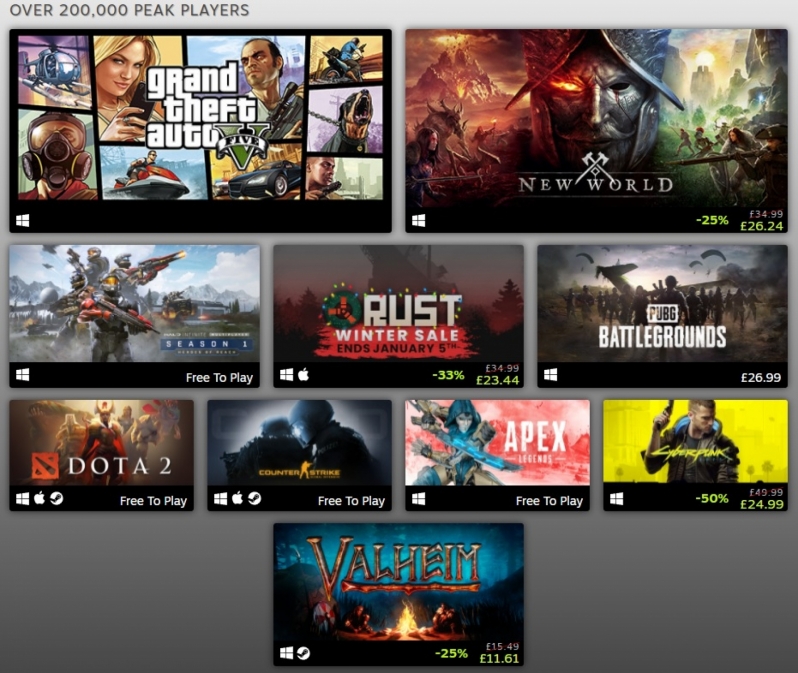 The Top Selling VR list represents the 100 best-selling VR-only experiences of 2021. Like the Top Sellers list, these are based on revenue. While many games on Steam offer supplemental VR modes and experiences, we limit this list to VR-only to showcase games that are designed solely for the virtual realm.

The VR catalogue continued to grow in 2021 with over 500 new VR-only games released throughout the year. Many of these releases made their way onto this year's Top Selling list, which features dozens of titles making their debuts. However, the stalwarts at the top remain unchallenged this year, with only one new game appearing in the Platinum category (Into the Radius).

Although this list requires that an app be VR-only, many existing games on Steam added VR support and VR dedicated modes throughout the year. If you're thinking of buying a VR device, chances are you might have a game in your library with optional VR support. 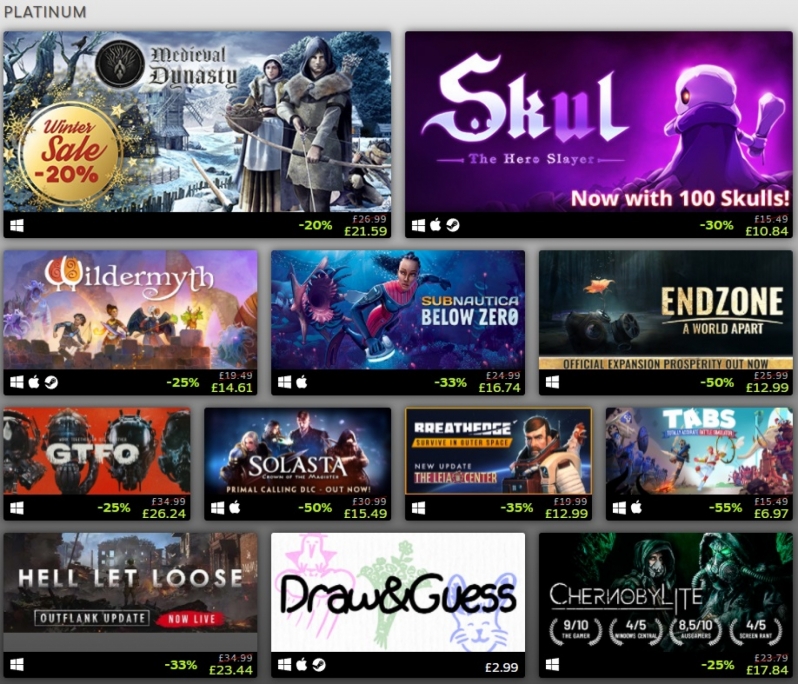 This list represents the games that registered the most controller sessions during the year. Specifically, it's a ranking of games based on the highest number of unique controller players that they reached through December 15th, 2021.

With the growth of games and player numbers on Steam during 2021, it's not surprising that the amount of controller sessions went up during the year as well. Whether it was a console controller, a flight stick, or a dance pad, millions of unique devices connected players to their games during 2021.

Games within the sports genre have always been popular with controllers, but 2021 took that to another level with soccer specifically. EA SPORTS FIFA 21 returned to the Platinum category this year, joined by its successor, FIFA 22. And if two wasn't enough, eFootball 2022 joined them, giving soccer games a 25% share of the Platinum category. Variety awaits those who delve a bit further into the list though, with plenty of other sporting options, along with other genres that are begging to be enjoyed with any input device. 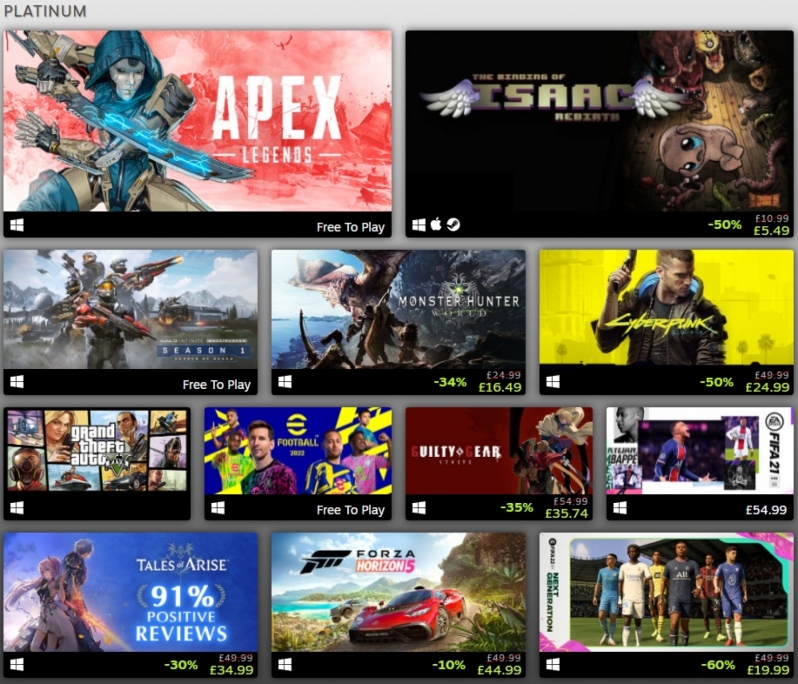 A couple of notes regarding the lists themselves. Since we don't divulge revenue specifics for the games on these lists, we sort them into categories to give an idea of how they stack up. Games are randomly sorted within the following categories:

The games on the Most Played lists are organized by peak concurrent player count and grouped into thresholds based on the number of players.

Finally, when generating these lists, we are looking at data from January 1st 2021 through December 15th, 2021.

You can join the discussion on Steam's "Best of 2021" Games List on the OC3D Forums.