Steam breaks another concurrent users record as it enters 2022

Last weekend, Steam set a new concurrent users record, proving that the PC gaming market is continuing to grow, despite the world's poor stock stocks of graphics cards at retailers.

Over the weekend, Steam achieved a concurrent user count of 28,230,661. In January 2021, Valve set their concurrent user record at around 25.4 million, showcasing significant growth within Steam's userbase. By the end of this year, Valve is likely to break past 30 million concurrent users, assuming that the company's growth continues.

Right now, Counter Strike: Global Offensive remains Steam's most popular game, with DOTA 2 following close behind. Over the weekend, these games achieved concurrent player counts of over 880,000 and 748,000 respectively, making both games more than 2x as popular as Steam's 3rd place game, PUBG: Battlegrounds, which has a concurrent player peak of over 351,000.

Despite rising competition within the PC games market from the Epic Games Store and Microsoft's PC Game Pass service, Steam remains as PC's premiere games launcher, and the introduction of competition has done nothing to stifle Steam's growth.

You can join the discussion on Steam breaking another concurrent users record on the OC3D Forums. 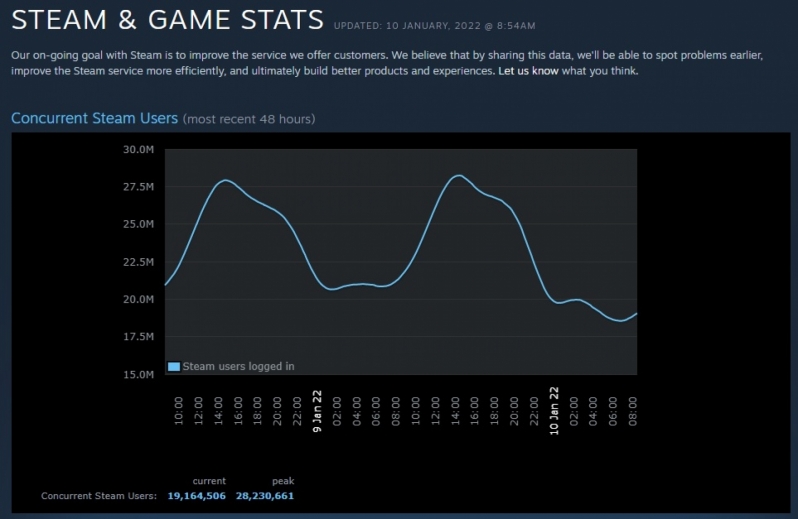 dazbobaby
Other news, steam are refunding 2042 no matter what, even if you bought it more than 14 days ago and played more than 2 hours.Quote

Warchild
Quote:
Is it that bad?Quote
Reply