Over 25 million Steam users online at once!

Steam is starting 2021 on a high, having already broken new ground by having over 25 million users on the platform at once, breaking last month's records.

This new record comes almost one month after the release of Cyberpunk 2077 on Steam, which currently has daily concurrent player counts that exceed 200,000. Recent releases to the platform like Apex Legends is also contributing to Valve's recent success, with the game having over 100,000 concurrent players at peak times. Even with these more recent successes, old favourites like Counter-Strike: Global Offensive, Dota 2, PlayerUnknown's Battlegrounds and GTA V are all maintaining high player counts over the holidays.

With the onset of new coronavirus lockdowns in many regions, a lot of people are turning to games to hang out with friends and communicate with those that they cannot visit. This has brought more people to platforms like Steam.

It is worth noting here that Cyberpunk 2077 released on PC through Steam, GOG and the Epic Games Store, making the game's concurrent player count higher than what Steam has reported. Valve can only count how many Cyberpunk players were playing the game on Steam, though it is likely that Steam was the most popular storefront for the title. 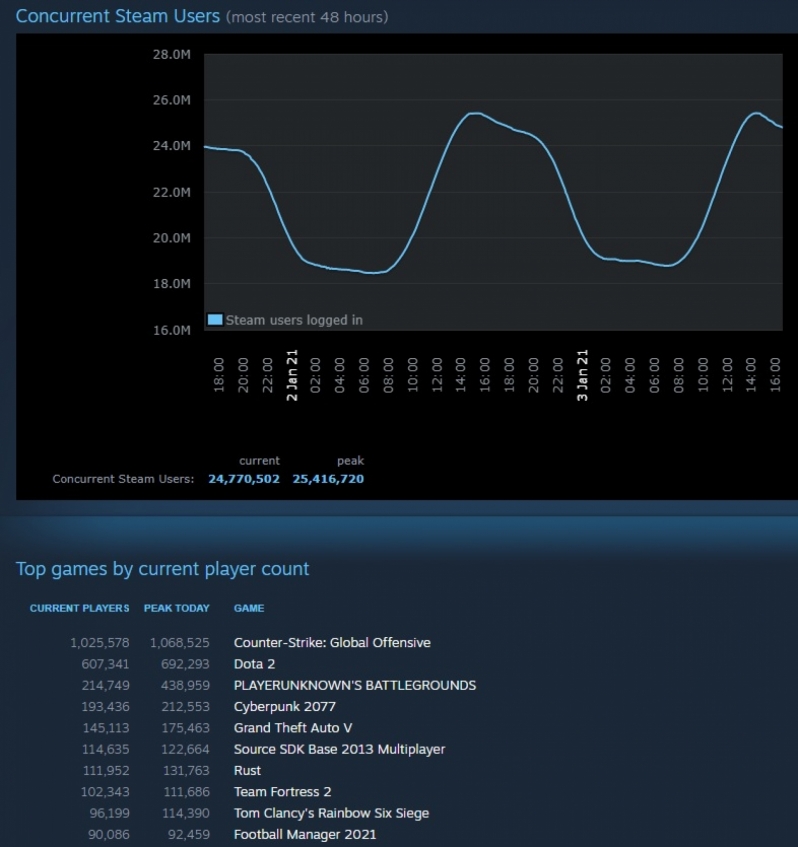 You can join the discussion on Steam hitting user counts of over 25 million on the OC3D Forums.

Dark NighT
The thread title says 2020, did we timetravel? xDQuote