Steam was crashing because some users had too many games

Steam fixed a 'crash for users with around 25,000 or more games'

Steam was crashing because some users had too many games

Can you own too many games on Steam? According to Steam's latest patch notes, you could. Valve's latest beta update for their Steam client contains a fix for a crash that only occurs when users have around 25,000 games or more, finally revealing how many Steam games were too many.

Thankfully, Valve's latest Steam update addresses this issue, allowing PC gamers to own over 25,000 PC games without any issues. At the time of writing, Steam has over 51,000 PC games; and according to Steamladder, a Steam analytics website, three public Steam profiles have passed the 25,000 game threshold.

With Valve's fix, which should be part of Steam's main update branch soon, Steam users will no longer face this ludicrously high game stability limit. Soon, you won't be able to own too many Steam games.

In 2020 alone, Steam added over 10,000 games to its service. Within a few years, Valve is likely to have over 100,000 games on its Steam client. As more time passes, more and more PC gamers will have over 25,000 games, especially if they are fans of game bundles from Humble and Fanatical. 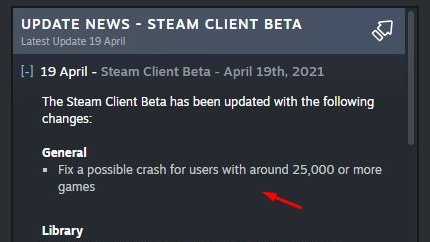 You can join the discussion on some Steam users having too many games on the OC3D Forums.

YOUDIEMOFO
I mean like whoa on the games library and all. That's quite a bit for one person man.Quote

queeg
Duuude 420 yesterday ithought my library had grown large with around 300 games im an old gamer gamer too ... that was my first thought whoooa

Bagpuss
Has Gabe been using his 'Master Unlock Key'....

Dawelio
25 000 games? How is that even possible? You won't even live long enough to even have played half of those games fully lol.Quote
Reply