If you have been looking forward to playing Stray tomorrow, I have bad news for you. Everyone's favourite soon-to-be-released cat game has shader compilation issues on PC, which means that the game exhibits frequent stutters that hamper the game's performance and playability.

Stray is coming to PC and PlayStation on July 19th, allowing players to take control of a cat that is lost and separated from its family. Players must roam the neon-lit city to progress, finding curious droids along the way that may help, and more dangerous creatures that won't.

While Stray's developers have confirmed that they are working on a latch that will fix a number of the game's early issues, this patch will be a post-launch update. That means that PC gamers will have to live with Stray's shader compilation issues on launch day. 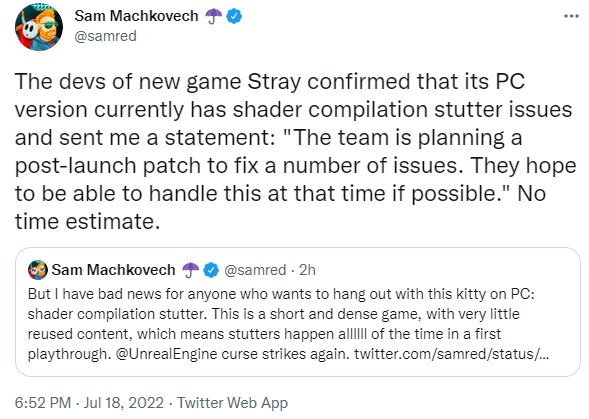 What are shader compilation stutters?

If there is a phrase that should bring fear to all PC gamers its "shader compilation stutters". If you have ever had a game momentarily freeze or stutter frequently during early hours of gameplay, then you have probably seen shader compilation issues before.

In many games, shaders compile the first time you encounter them. In these instances, momentary hitches and stutters can occur, and at the start of games these hitches can happen very frequently given its relative wealth of new content. Pre-compiling shaders at a game's start-up can prevent these issues, but these tasks can often take a long time to complete, specially for large games. If you have ever had to wait a long time for any recent Call of Duty to become playable on PC, you have probably been waiting for shader compilations to complete. In theory, PC gamers only need to do this once, but the bad thing about pre-compilation is that new driver updates, hardware changes, and game patches may force this task to start again. With pre-compilation, compilation stutters are gone, but at the cost of long wait times.

On consoles, pre-compiled shaders are often installed with games, or shader compilation is completed as a game installs. For fixed hardware systems (as every console of the same type is essentially the same), developers can more easily mitigate shader compilation stutters. On PC, these stutters are harder to mitigate.

Hopefully Stray's upcoming PC patch can address the game's stuttering issues, but until then, don't expect the game to run smoothly. The game is a short title with little reused content, which means that PC players could experience a lot of stutter during their entire playthrough.

You can join the discussion on Stray's launch day stuttering issues on the OC3D Forums.

Dicehunter
How do these games pass QA testing ? something like this would've been caught early on, Surely postponing the game by a week or 2 to make sure it had a smooth launch would've been the better idea, Games on PC already have a terrible reputation for crappy performance.Quote

meuvoy
I was really interested in this title, considered twice to get the 10% pre-order discount... Glad I didn't, Thanks!Quote

Bagpuss
Quote:
They ignore it.


The money is in the console versions where shader compilation is not an issue for fixed hardware.


PC gamers just have to put up with it..Quote
Reply