The Chinese Gaming Giant is searching for a global gaming audience

In recent years, Tencent has become a dirty word amongst many gamers, with the Chinese giant holding stakes in Activision-Blizzard, Ubisoft and a whopping 40% stake in Epic Games. On top of this, the company also owns Riot Games outright, making the lesser known company one of the biggest names in gaming.

Before now, Tencent's gaming platform, which was recently rebranded to become WeGame X, was only available in China, but now the service has opened itself to a worldwide audience through servers in Hong Kong.

At the time of writing, the service is in "Early Access" and only hosts 17 games, which for the most part are Chinese indie titles. The company also lists big names like Deep Silver, Hello Games and Larain Studios on the service's website.

Given the storefront's early state, small game selection and other factors, it is unlikely that we will see WeGame X become a viable competitor to the likes of Steam in the near future, though it is worth noting that the platform does feature user reviews, cloud saves and offline modes for some titles. One major downside of the platform is that many of its games are not localised for western audiences. 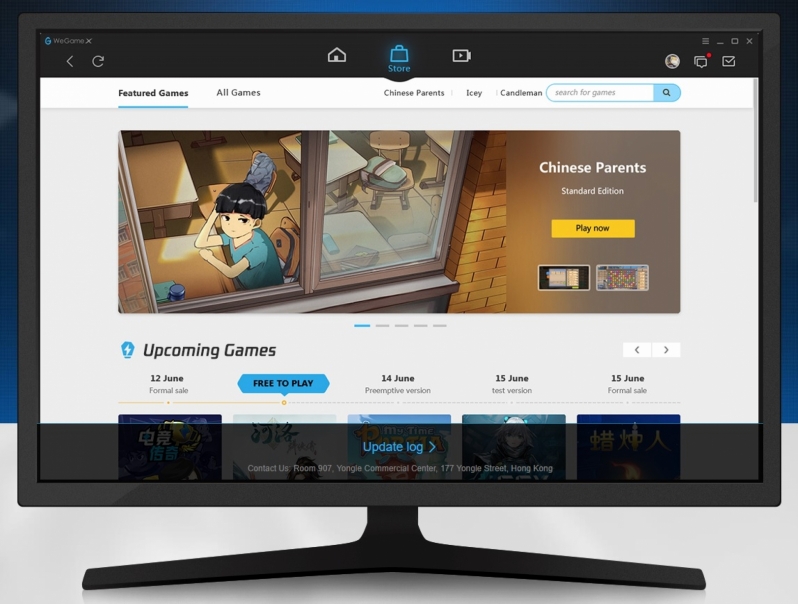 Tencent has been the subject of a lot of controversy in recent years due to their rapid expansion and ongoing allegations that the company is linked to the Chinese government. This is n turn has made many gamers wary of getting involved with their subsidiaries.

This fear has also been extended to the Epic Games Store due to Tencent's 40% stake in the company, though Epic Games' CEO Tim Sweeney has stated that "All of Epic’s big decisions are made here in the USA and as CEO I’m 100% responsible for them." On top of this, Sweeney has stated that he has not regretted allowing Tencent to invest in Epic Games, despite "recent anti-China rage" from gamers.

You can join the discussion on Tencent's WeGame X platform becoming available worldwide on the OC3D Forums.

Greenback
I'd even be one of the people saying if it's exclusive I'll skip it, wouldn't trust it not to spy on every thing you doQuote

tgrech
I find the Chinese spy paranoia stuff regarding any company incredibly ironic. Do people really trust American & British companies over them? Britain is literally the surveillance nation of the world & America seems to need 10 different independent "information agencies", the Chinese are just catching up on the rest of the worlds spying habits. Western governments attack these companies because it compromises their own underhand intelligence efforts, the Chinese government doesn't care about random American citizens, and those Chinese companies don't even have crap to advertise to them.Quote

Damien c
Quote:
I find it hilarious the amount of times I hear people tell me that my phone is spying on me because it's a Huawei phone.

The last conversation I had with someone included:

The Chinese government was reading my text messages
Recording all my internet usage
Recording all my phone calls
Noting what app's were installed and used at what times of the day
Using my GPS in it to monitor locations I had visited to try and see if I went anywhere with sensitive information such as government sites etc
Using the camera in my phone to record video footage of me walking around the streets, in my house etc

Yes there are some things with Huawei that are suspect and I cannot comment on what I know about some stuff, but the way people act about the Chinese hardware and software just makes me laugh.Quote

tgrech
Yeah I also use a Huawei(Got a Nova2 for £160 a year ago since it's decently spec'd for what I use it for, small enough for me to not constantly drop it and had Project Treble support), what confuses me even more with this is how it's only selective Chinese companies, but if it's say Lenovo (Motorola, ThinkPads, ect) it doesn't seem to matter. I owned several Moto G models before this phone and from the G3 they were all Chinese manufactured, as is most of the Western laptop market nowadays.

Even more ironic when you consider the fact literally every Google certified Android phone tracks your location and uploads your location online with a timeline as a standard default-enabled feature, as well as your search history, advertising history, contacts, call history, ectQuote

We can't have them'uns spy on us, because they are one of them'uns. HOW DARE THEY SPY ON US'UNS!Quote
Reply