Expect heavy use of Asynchronous Compute

Gears 5 is due to release on September 10th on PC and Xbox One, with Xbox Game Pass Ultimate subscribers gaining access on the game four days early on September 6th.

The Coalition, the developers of Gears 5, has officially revealed the game's final PC system requirements, detailing Min, Recommended and Ideal system specs for the game's PC version, and has released details about the company's hardware partnership with AMD.

Thanks to their partnership with AMD, The Coalition has confirmed that the game has been optimised with AMD Ryzen and Radeon hardware in mind. For starters, the game is based on Microsoft's DirectX 12 API, and the game will be making heavy use of Asynchronous Compute, covering much of the game;'s post-processing pipeline.

AMD has also confirmed to us that the game will offer MUltithreaded Command Buffering, to ensure that an "AMD Ryzen processor (can) reach the Radeon graphics card faster for higher performance, better graphics and reduced latency." In addition to this, AMD's FidelityFX is due to be added to the game in a post-launch patch. 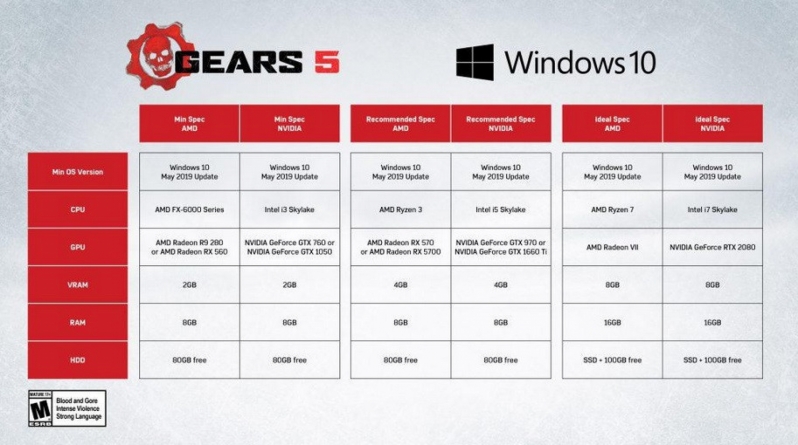 Unlike Gears of War 4, Gears 5 makes the game's high resolution (4K) texture pack an optional extra for PC gamers, ensuring that it is only installed on PCs which have enough free storage space and a powerful enough graphics card to utilise properly. This will reduce the game's size from 100GB to around 80GB.

Those who want to see an early look at Gears 5's PC performance can have a look at our Gears 5 Alpha performance analysis.

You can join the discussion on Gears 5's PC system requirements and The Coalition's hardware partnership with AMD on the OC3D Forums.

Dicehunter
Very interesting that a Radeon VII is on the same level as a 2080 in the "Ideal" section.Quote

Honestly not the most informative Spec requirement I've ever seen. Missing the most important bit, resolution, which has been standard for like ever.

Plus not liking the 100GB+ install size.Quote

Dicehunter
Quote:
As it's on Steam it's not a big deal, To me at least, My problem was with Gears 1 + 4 on the MS Store, As I have a very slow net connection, 20Mbps, It took me a few days to fully download Gears 4 at 120GB, Having to pause it now and then to do work and Skype video calls etc... Upon unpausing the download the game install when it finished downloading would be corrupt so the game would be unplayable and seeing as the MS Store has no "Verify Game Install" option like Steam, Origin and Uplay have had for 5+ years now, It meant uninstalling the whole thing and then leaving the rig on for 2'ish days with nothing else being used in hopes of a corrupt free download.Quote

tgrech
Quote:
If you go into Settings>Apps>[Select MS Store game]>Advanced Options>Reset then a game should "verify" itself and re-download the corrupted bits via the MS Store, doesn't work for all issues but seems to fix most I find, and usually I have to do it after downloading big games that I've paused.Quote

Dicehunter
Quote:
Sadly doesn't work, What that option mainly does is correct install paths etc... but actually redownloading corrupt files is an option that is still missing.Quote
Reply