Update - We have recieved confirmation that The Elder Scrolls Online will receive support for FSR 1.0 in June. No comments were made to us regarding AMD's FSR 2.0 technology.

The Elder Scroll Online's High Isle chapter is launching on June 6th on PC, adding to the game a new 12-player trial, new companions, new story content, and a tonne of other content. Alongside this new chapter, The Elder Scrolls Online will also be receiving new base game content that all players of the MMO can enjoy. This content includes new Spanish localisation options, new houses, and support for AMD's FidelityFX Super Resolution (FSR) technology.

At this time, we do not know if The Elder Scrolls Online will be receiving support for AMD's FidelityFX Super Resolution 1.0 technology or AMD's newly revealed FidelityFX Super Resolution 2.0 technology. AMD's FSR 2.0 technology is launching this summer and promises to deliver gamers higher levels of image quality than FSR 1.0, moving AMD's resolution upscaling technology from a spatial technique to a temporal technique. It is possible that The Elder Scrolls Online may receive support for both FSR 1.0 and FSR 2.0. 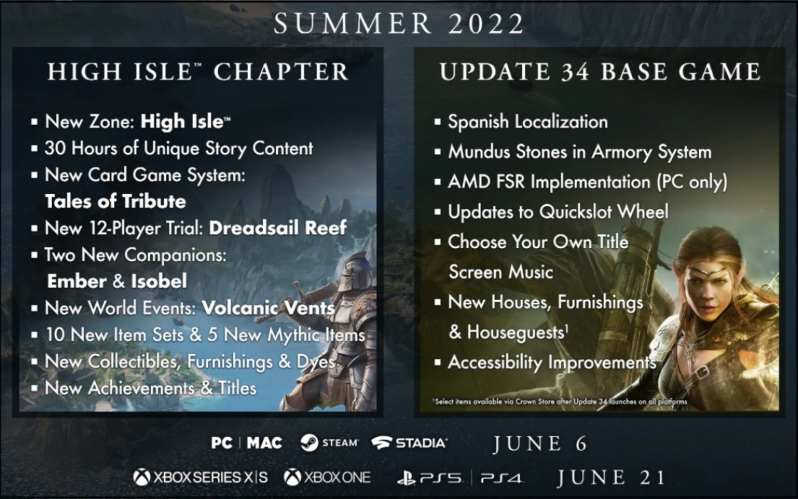 We have asked Zenimax Online Studios whether or not The Elder Scrolls Online will be supporting FSR 1.0, FSR 2.0, or both. (We have recieved confirmation that the game will support FSR 1.0 this June.)

You can join the discussion on The Elder Scroll Online's getting FSR support with its High Isle chapter update on the OC3D Forums.