Quick resume, but for PlayStation 3

The RPCS3 PS3 emulator has just gotten a huge update

Thanks to some hard work from a developer called elad335, the PlayStation 3 Emulator RPCS3 has just recieved support for Save States, a much requested feature.

In recent years, RPCS3's has seen its performance and compatibility improve significantly. Additionally, the emulator has also gained support for upscaling through AMD's FidelityFX Super Resolution 1.0 technology. Currently, almost 70% of the PlayStation 3's game library is playable through RPCS3, and the team behind the emulator are continuing to work to improve the emulator by adding new features, boosting its performance, and increasing its accuracy/compatibility.

How to use Save States

Using the newest builds of RPCS3, gamers can create a save state by hitting Ctrl and S simultaneously. This should not be done during autosave operations or when game data is being installed. To load a savegame, gamers should right click their game and select "boot with savestate".

The RPCS3 development team hopes that save states will remain compatible with future versions of RPCS3, though future upgrades to RPCS3 may feature major changes that may make older save states incompatible. Save states can vary in size from 50MB to 2-3GB. The size of these save states will vary on a game-by-game basis. Future updates to save states may make save states smaller in the future. 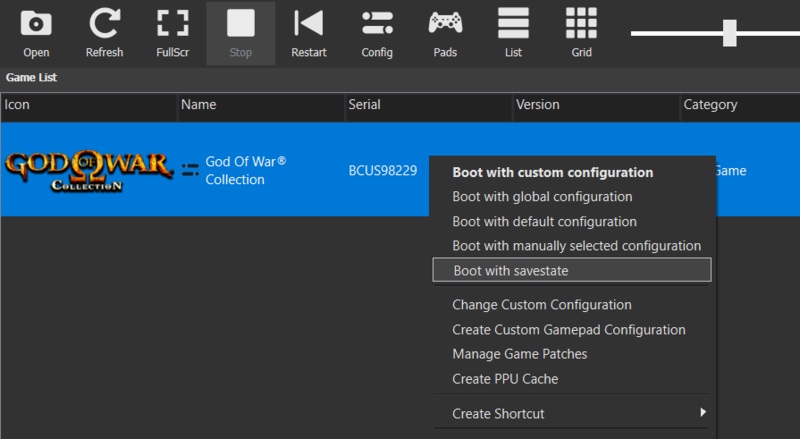 Moving forward, the RPCS3 team plans to improve RPCS3 with additional optimisations and accuracy improvements that will make their software more compatible with the PlayStation 3's game library while also offering their users increased system performance.

You can join the discussion on the RPCS3 emulator gaining support for save states on the OC3D Forums.