The Yuzu Nintendo Switch Emulator has been taken major strides over the past few years, accelerating its performance, boosting its accuracy and enabling more and more Switch games to be played from start to finish using it. Now, Yuzu's latest update is due to make the emulator more accessible, rewriting the software's memory management code to make the emulator use 50% less RAM.

This change will allow the Yuzu emulator to be used with lower-end PCs, removing the use cases that will see the emulator eat up 8GB or even 16GB of system memory. Now, the Yuzu emulator won't use more than 4GB of memory, closely matching what Nintendo's Switch console uses.

Upgrading the Yuzu emulator's memory management took around two months of development effort, but it has resulted in more efficient hardware utilisation and increased accuracy when compared to Yuzu's older memory management system. This work on virtual memory management has also lead to popular games like Super Smash Bros Ultimate becoming playable on the Emulator.

A beta release for Yuzu's new memory management system is already available to the emulator's Patreon supporters, though the emulator's creators have stated that these memory improvements are "a stepping stone for a major improvement to Yuzu". We hope to learn more about this "huge update" in the coming days or weeks.

The graph below highlights the improvements to memory usage that the latest version of Yuzu offers. 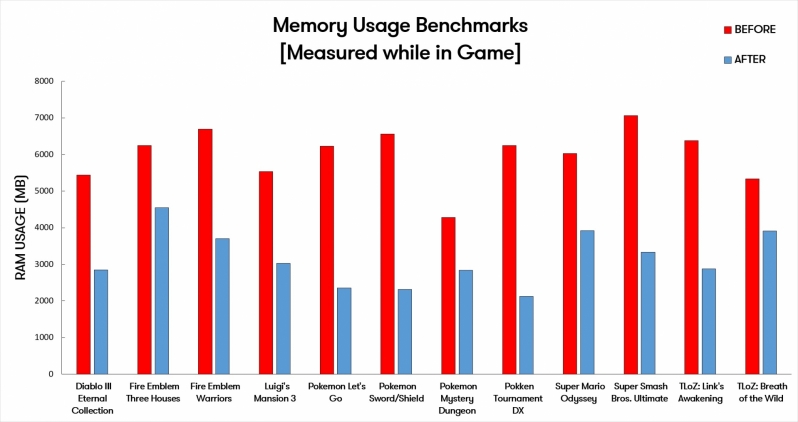 You can join the discussion on the Yuzu emulator's latest update halving the emulator's memory usage on the OC3D Forums.


I watched the other day as ALL of my 32GB RAM was eaten up whilst it was loading Crash Team Racing, I have never had that happen before, not even close to it.


I couldn't believe it when I happened to notice RAM usage at 17GB and then it just kept going up & up.

..and after all that it couldn't even get past the character select screen and in to an actual race!Quote

NeverBackDown
That just means there is a memory leak and causing issues so the game is trying to load more assets past the character screen but it can't because there's no memory left. It's hung up.Quote


Heres Luigis Mansion, in game hitting 22GB! and lets not forget the 6.5GB of VRAM