It's official; Creative Assembly has revealed Total War Warhammer III, the final entry of the Total War: Warhammer series.  The game is due to launch in late 2021 and focus on areas of the Warhammer Fantasy universe that have so far gone unseen.

Total War: Warhammer III is coming to Windows PC, macOS and Linux on through Steam and the Epic Games Store, with the game launching first on Windows. Feral Interactive will be working on the game's Linux and macOS versions and will release on those platforms as soon as those versions of the game are ready.

Based on the game's reveal trailer, which is available to view below, Total War Warhammer III will focus on the factions of Chaos and the nations which border the Chaos Wastes. Faction-wise, the game will launch with nine playable Legendary Lords, with Creative Assembly confirming that the game will include four ruinous powers of Chaos; Nurgle, Slaanesh, Tzeentch and Khorne, the warrior nation of Kislev and the empire of Grand Cathay.

Like prior games, Total War Warhammer III will feature a pre-order/early adopter incentive. Sadly, Creative Assembly has not revealed this incentive at this time, though it will likely come in the form of an additional faction/Legendary Lord to play as.

Is the game set during The End Times?

No, Total War Warhammer III is set during Karl Franz's reign, just like its predecessors. Warhammer Fantasy 8th Edition will be the game's main source of lore, though Games Workshop and Creative Assembly have worked together to expand the game's Kislev and Cathay factions to give both nations deeper lore.

For those interested in the authenticity of Total War Warhammer III's depictions of Kislev and Cathay, rest assured that these depictions will be "legit" and approved by Games Workshop.

In Total War Warhammer III, players will be asked to "Rally your forces and step into the Realm of Chaos", and to "conquer your Daemons." Players will alternatively be able to command the armies of Chaos.

Will there be a combined map for Total War Warhammer I, II and III?

Yes, but not at launch. This map will also be exclusive to those who own Total War Warhammer I, II and III on the same PC storefront. Right now, Creative Assembly's focus is on the development of Total War Warhammer III's main campaign. However, the studio has confirmed that more DLC for Total War: Warhammer II will be released before then.

Should I buy Total War Warhammer III on Steam or the Epic Games Store?

Fans of Total War Warhammer can pre-order the game through Steam and the Epic Games Store. PC gamers can also purchase both versions directly from Creative Assembly, giving the studio a larger cut of the game's revenue. 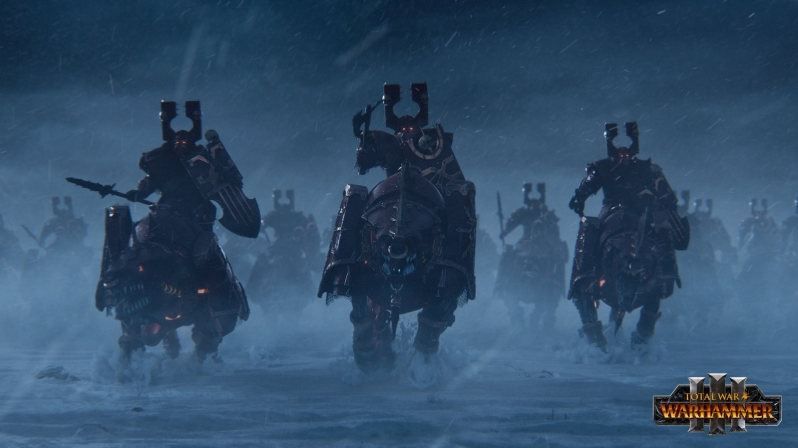 Will Total War Warhammer II continue to be supported?

At this time, Creative Assembly has not released any gameplay footage or screenshots for Total War Warhammer III.

You can join the discussion on Total War Warhammer III on the OC3D Forums.

NeverBackDown
6 factions and 9 LL at launch. Not including the Race Pack early adopter bonus. Not bad I think.

What is bad and annoying is CA have a habit of announcing nearly a year before launch for all their titles and then go radio silent up until 2 months before launch. Incredibly annoying. Because meanwhile they release dlc for the current released game.

Really wish they would announce when the game is actually ready with say 2 weeks of "hype building" as they call it. Otherwise all these inevitable delays or bad launches leaves a bad taste in the mouth because "if you announced it 9 months ago how is it still this terrible or not ready".


But outside of that rant, I am very excited for mod support at launch as well as playing with Kislev and Cathay who both factions were unlikely to make it but luckily GW worked with CA on fleshing out those factions. Will be really great to see what they did.Quote

WYP
Quote:
Yeah, there is almost no lore for the Empire of Cathay outside of tidbits, so it would be great to see more. Kislev was also in need of a lot more depth, so it is great to see more from them.

Games Workshop is returning to the Warhammer Fantasy setting, so it makes sense for Games Workshop to work on fleshing out these factions. It is also great to see some Chaos that isn't Chaos Undivided.

As always, I think I will be looking forward to the giant world map the most. It would be nice to have something past the World's edge mountains to explore and conquer. I really hope that we see some Chaos Dwarfs this time.Quote

NeverBackDown
My only concern is performance for the large world map. As it is they had to cut down on the full scope for WH2. Not only is the overall performance of that game pretty lackluster, I can't imagine it getting better for WH3. Really hope they finally figure out optimization and can not cut content out of the game because they can't handle the load. It's a pretty bad excuse they've used a few times now. I want each faction to have a large presence on the world map and not be cut down for the sake of technical limitations.

With that said I do agree that's my most looked forward to feature. If they can wow everybody with it this game will sell like crazy. It would be the first time all factions and all these units could exist in one game. Warhammer fans will go crazy if they do it right.Quote

WYP
Quote:
They did patch Warhammer II a while back to decrease the end turn times etc. Hopefully, there has been some more engine work done since the launch of Warhammer II.

I'm curious whether or not the engine will be an evolution of Warhammer II or if it will contain many of the features from Three Kingdoms. As great as Total War Warhammer II is, it hammers hardware and always screams at me to upgrade my CPU.Quote

NeverBackDown
It'll be an evolution for sure from WH2 but they could still take the optimizations from the 3K DX11 pipeline.

Problem now is a better cpu won't help. The engine itself bogs down near 10k units and no amount of power will help. They really need to fix that and either finally update dx12 or introduce Vulkan.

As for features if they can improve siege's that's all I would need to be happy (feature wise). I could see better diplomacy options from 3k being useful as wellQuote
Reply