Will Sony and Microsoft listen?

Ukraine calls on gaming companies to cut off Russia and Belarus

Everyone should already know what's happening in Ukraine. Russia has invaded the nation and western nations have responded with heavy economic sanctions. Now, Ukrainian officials have called on gaming companies to support Ukraine by temporarily blocking their users in Russia and Belarus and preventing gamers from these nations from taking part in esports events. Additionally, Ukraine has also called for companies to cancel all esports events within Russia and Belarus.

With these actions, Ukraine's Vice Prime Minister Mykhailo Fedorov hopes that the Russian people will be better motivated to oppose the aggressive actions of their nation's leaders. Much of the sporting world has already moved to block Russian participation, and now Ukraine has asked for the gaming world to take similar steps.

For those who are wondering why both Russia and Belarus are called out by Ukraine, you should know that Belarus has hosted Russian troops and allowed the Russian Federation to invade Ukraine though their territory. This is why Ukraine wants actions to be taken against both nations, as Belarus has actively supported Russia's invasion.

In the tweet below, Mykhailo Fedorov has specifically called for Microsoft and Sony to take action against Russia and Belarus. If these companies take action, Russian and Belarussian gamers could be locked out of the PlayStation and Xbox online gaming ecosystems.

You can join the discussion on Ukraine calling for Xbox and PlayStation to block users from Russia on the OC3D Forums. 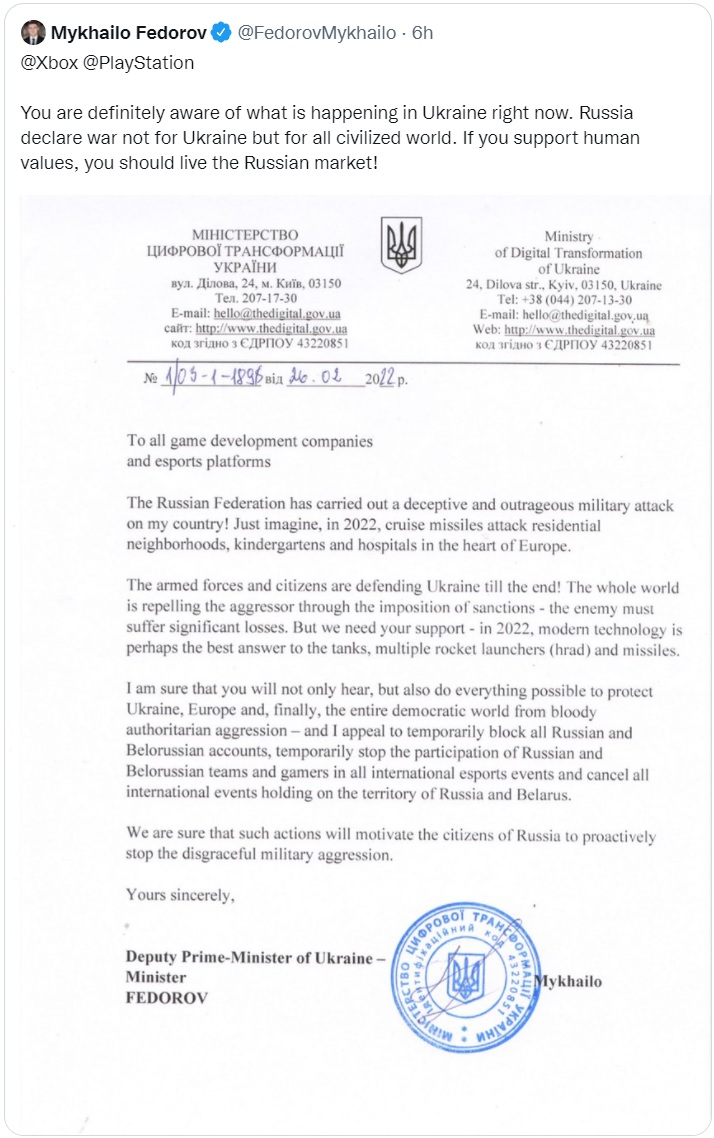 Dicehunter
Quote:
I have distant family in Russia that were at the mass protests against the war, I'd say the high majority of Russians don't want this unnecessary conflict with their neighbours but Putin is criminally insane.Quote

Gothmoth
as little as it will affect the regime, i think isolating russia as much as possible is a good idea.


you don´t give people like putin what they want.. aks neville chamberlain how that worked out in the past.Quote
Reply