Ray traced reflections and global illumination will be available

Fatshark Games and Nvidia have confirmed that Warhammer 40,000 Darktide will be launching on PC with support for DLSS, Reflex, and ray tracing at launch.

Warhammer 40K: Darktide is coming to PC through Steam on September 13th, offering gamers brutal first person combat that offers players a mix of FPS and melee action as they fight through hordes of enemies.

Fatshark will be using ray tracing to enhanced Darktide's reflections and global illumination. Nvidia has claimed that the game is utilising Nvidia's RTX Global Illumination (RTXGI) SDK, which has been added to Fatshark's custom game engine.

Like Fatshark's previous Warhammer-themed titles, Darktide is a co-op action title where players can play as one of four characters, none of which are a Space Marine. First there is the oversized Ogryn, a giant ad-human that is two times as large as Darktide's other characters. Next up there is the Veteran class, a former Imperial Guard Stormtrooper who wields a lasgun and a gas mask. On the weirder side, we have the Zealot, an inquisitorial style character with a power hammer and faith-based abilities, and the Psyker, which is effectively a warp-powered space wizard.

Take back the city of Tertium from hordes of bloodthirsty foes in this intense and brutal action shooter. Warhammer 40,000: Darktide is the new co-op focused experience from the award-winning team behind the Vermintide series.

In the depths of the hive, the seeds of corruption threaten to turn into an overwhelming tide of darkness. A mysterious and sinister new force is seeking to take control of the entire city. It is up to you and your allies in the Inquisition to root out the enemy before the city succumbs to Chaos.

As Tertium falls, Rejects Will Rise. 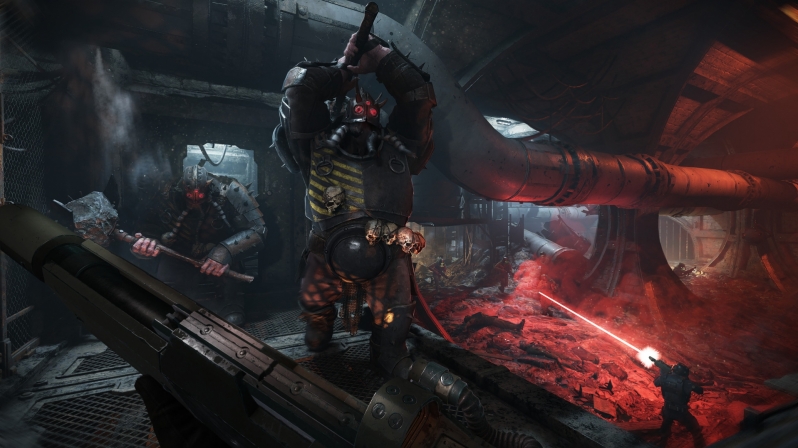 Nvidia has slso confirmed that Warhammer 40K Darktide will be available on day-1 through the company's Geforce Now streaming service.

You can join the discussion on Warhammer 40K: Darktide's support for ray tracing, DLSS and Nvidia Reflex on the OC3D Forums.

Warchild
I think DLSS and FSR is an absolute must for all games that focus on high graphical content these days.Quote

WYP
Quote:
Definately. Both technologies promise more performance without much quality loss. It's a huge win for any game that's hard on the GPU.Quote
Reply