At 8 PM BST, Ubisoft Forward September will begin, an event where the publisher reveal to gamers what is in store for franchises like, Watch Dogs: Legion, Hyper Scape, and Rainbow Six Siege, update their fans on the progress of their new IP and showcase some new games for the first time.

At 7 PM, Ubisoft will start their Ubisoft Forward pre-show, where the company plans to host a Brawlhalla matchup between the Ubisoft News team and the developers at Blue Mammoth. The publisher is also set to talk to the developers of Roller Champions, For Honor, The Division 2, and Ghost Recon Breakpoint.

Gamers will be able to view Ubisoft Forward using the embedded video below.

The infographic below will show you when Ubisoft Forward will stream in most global regions.

You can join the discussion on Ubisoft Forward September on the OC3D Forums. 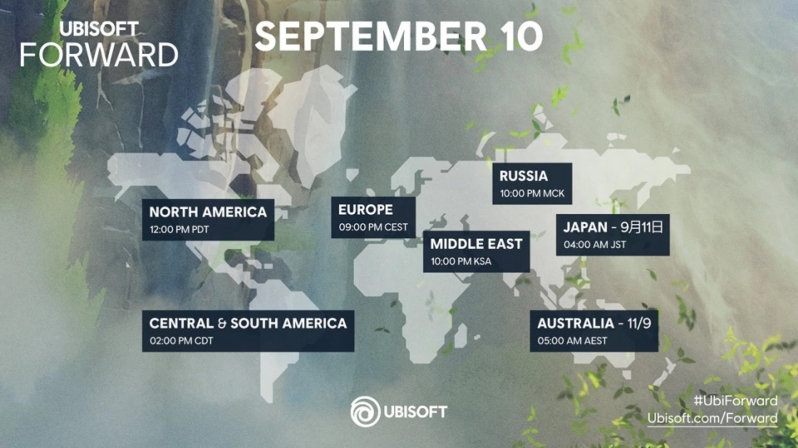 NeverBackDown
I'm hoping they talk about Skull and Bones. The pirate game based roughly off of Black Flag. That game if not talked about is probably dead at this pointQuote

Warchild
Quote:
its been massively overhauled. Serious delays to go back to design. That and Settlers 8 are the only 2 ubi titles that interest me.

NeverBackDown
Oh I can't believe I missed that. Thanks for that!

Pretty sad news though. I was looking forward to it. It might be possible to get some update on the title but I am not hopeful after learning about the delay.

Warchild
Quote:
Coincidentally this popped up just 1 day ago on Kit guru