With the release of the game's Battle for Azeroth expansion, World of Warcraft gained support for DirectX 12, Microsoft's latest graphics API. This feature upgrade for World of Warcraft enabled increased multi-threading within World of Warcraft's engine, increasing game performance on modern systems while offering the game a higher baseline for future graphical upgrades.

While World of Warcraft's visuals are simplistic by today's standards, Blizzard's adoption of DirectX 12 could springboard the game's visuals to new heights, and evidence of this can already be seen within the games' shadowlands alpha.

Support for DXR raytracing is coming to World of Warcraft, and blizzard's raytracing journey with shadows. Right now, options for Ray Traced Shadows are within World of Warcraft's Shadowlands Alpha, but at this time the option doesn't do anything. In future alpha or beta releases, this new graphics option could be enabled, bringing Warcraft's visuals to new heights.

Right now, hardware-accelerated raytracing is only available on Nvidia's RTX 20 series graphics cards, though that is due to change with the release of AMD's RDNA 2 graphics cards later this year. At this time it is unknown how effective Blizzard's raytracing support is within World of Warcraft Shadowlands. 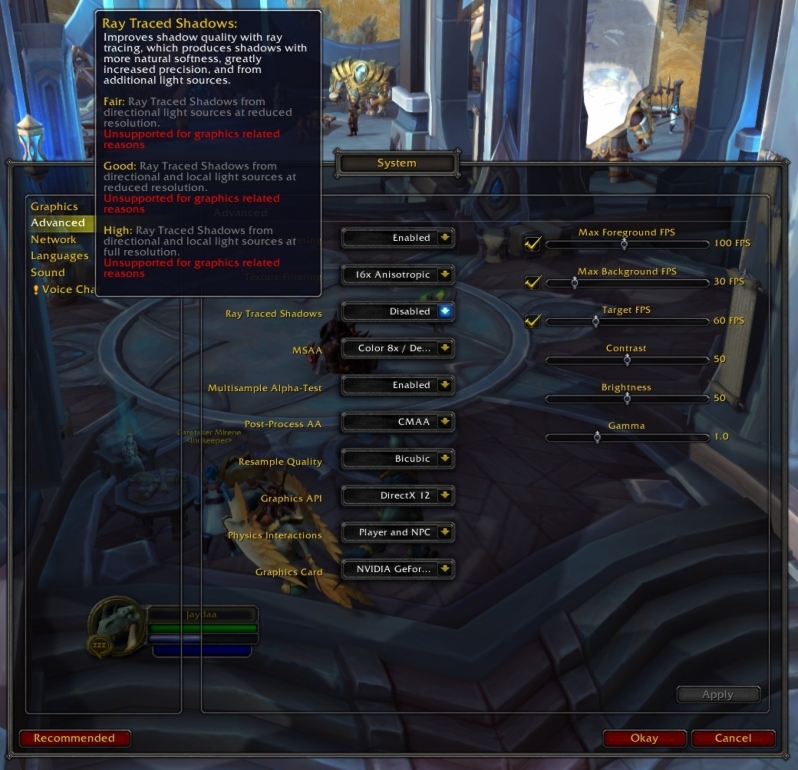 You can join the discussion on World of Warcraft's Shadowlands Alpha on the OC3D Forums.

hmmblah
It's always nice when they add new features. I wonder what the performance hit will be and if it will be viable in raids.Quote

WYP
Quote:
Hard to know. WOW is mostly CPU-limited, so if the stress of raytracing doesn't add to that, it may not have as tremendous an impact as it had in other games. This will definitely be something that I'll want to look at.Quote

hmmblah
Quote:
Maxing shadows now at higher resolutions makes the game a slideshow in some instances. They still haven't fixed the lag issues in the Vale that have been a problem since the launch of 8.3. I'm guessing they won't even bother dedicating resources to fixing issues like this since a new expansion is on the horizon.

I can't wait to beta test Shadowlands when it launches.Quote

Greenback
Quote:
They haven't fixed the Ettin quest in redridge and that's been buggy since WOD, so I wouldn't hold your breath.Quote

Warchild
Quote:
I couldnt do full details in raiding/battlegrounds. Can't see it being great with RTX. Although it will most certainly look amazing.Quote
Reply