Earlier today, Microsoft confirmed that they had acquired Zenimax Media, the company behind Bethesda Softworks, the publisher behind The Elders Scroll, Fallout, DOOM and Dishonored franchises.

As part of a blog post on this acquisition, Todd Howard, the head of Bethesda Game Studios, discussed the potential of Microsoft's Xbox Series X/S hardware, praising the system's generational leap in both CPU and data streaming performance.

Microsoft's Xbox Series X/S systems both offer hardware specifications that are "optimised for the vast world's that we love to create", says Todd Howard. The Zen 2 CPU cores within both systems offer vastly higher clock speeds and raw performance per clock than last-generations Jaguar cores. In addition to this, Microsoft's use of a dedicated storage decompression chips frees up vast resources for developers to utilise. These innovations will allow game developers to create more complex game worlds, enabling titles that aren't possible on today's consoles.

With PlayStation 5 and Xbox Series X/S, SSD storage has also become the norm, allowing data to be streamed into memory at a moment's notice. This could potentially eliminate loading times, and allow games to feature more variation within shorter timeframes. This generational leap has massive implications for large scale RPG games.

Todd Howard has claimed that Bethesda has been forced into its "largest engine overhaul since Oblivion" thanks to the hardware innovations of next-generation consoles. These changes will be seen first in Starfield and The Elder Scrolls VI, both of which should be exclusive to next-generation console platforms.

With each new console cycle, we evolved together. From bringing mods to consoles with Fallout 4, now over a billion downloads, to the latest technologies fueling Xbox Series X/S. These new systems are optimized for the vast worlds we love to create, with generational leaps not just in graphics, but CPU and data streaming as well. It’s led to our largest engine overhaul since Oblivion, with all new technologies powering our first new IP in 25 years, Starfield, as well as The Elder Scrolls VI. 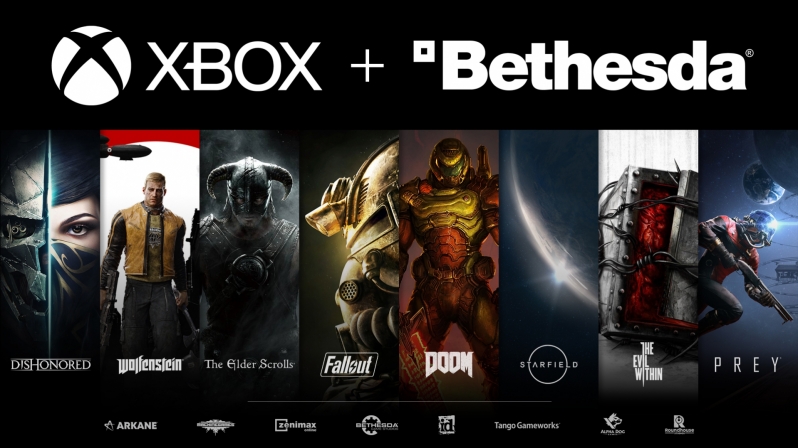 You can join the discussion on Xbox Series X/S leading to Bethesda's "largest engine overhaul since Oblivion" on the OC3D Forums.
«Prev 1 Next»

AlienALX
Oh and maybe now they can finally do a remaster of FO3. That would be incredible !Quote

AlienALX
Quote:
There are messages in the consoles on Fallout 4 slagging off the engine LOL.

I feel sorry for the people who made it tbh.

Zenimax suck. So I won't be sad to see the back of them. Microsoft are a corporation too, but they have been knocking out amazing games (FS, Forza etc) so fair play.

Hopefully now the company will be less about lawsuits and more about making amazing games. I think they also need to look at some of the franchises like Wolfenstein and focus on the better licenses.

Fallout 4 wasn't awful but it wasn't great. Not compared to Fallout 3.Quote

WYP
Quote:
Fallout 4 was a good game, but as a post-The Witcher 3 RPG, it is hard not to be disappointed in some regards.

The Witcher 3 really changed what people expect from a AAA RPG title.Quote

AlienALX
Quote:
I didn't really compare FO3 to The Witcher tbh. Too many people compare games like Fallout 3 or 4 to other RPGs, which I suppose is fair but to me TW3 was pretty boring. I mean, you have to go looking for the content that makes it wonderful to experience it, but if it's not something you're interested in it's kinda hard. Like, I'm not into Sci Fi either and really couldn't stand the Star Wars movies as a kid. I do appreciate them for what they are now, but I wouldn't say they were ever my favourite kinda themed movie. I got much more happiness from The Goonies and Indiana Jones tbh.

Fallout 4 obviously nailed the theme for me and there were additions (I will call them that, as they weren't really improvements) however about everything else about it was a let down. Sure it had content, but due to the new engine that content was massively cut down.

I'll give you an example as to why Fallout 3 is such a better game than Fallout 4. Immersion. Like, you walk into a building in FO4 and you can clearly see massive limitations in the engine. Rooms are smaller, and most buildings have nothing in them at all apart from blown up parts you can't explore and massively annoying "puzzles" so that you can get through them. This was done because of the size limitations of the buildings and the absolutely terrible loading times if you accidentally exited the building and then went back in.

Everything about Fallout 3 for me was perfect, apart from the fact it was clearly broken when released (the level cap, not being able to continue exploring if you finished the main quest etc). We all know about it, Bethesda issues. However, the best part of Fallout 3 for me was when you thought you had absolutely everything done and found and then you found a door in the middle of nowhere that led you into a building and you then spent hours in there. Sometimes they were so big you got lost, confused, and was literally at the point of rage quitting. Then you calmed yourself down, looked at the map and figured it out.

That was missing from not only Fallout 4 (the building exploration was laughable and they all looked the same, crayon scribbled bloaty mess) but FONV. Yes, what Obsidian did in two years was a miracle, yet once again it lacked the really deep exploration FO3 had. Mostly because Obsidian had two years and Bethesda about 7. However when you consider that Bethesda had 7 years or more from FO3 to FO4? it makes me wonder just how much of that was wasted on the "new" engine. And how much suffered because of it (like level size, scope, etc).

It also makes me wonder why Bethesda put in those quests that go on forever.. Maybe because they knew that the limitations of the engine would become a problem and exploration really wasn't anywhere near as good as FO3? or maybe they were just pushed for time?

RPGs do not work in engines with severe limitations. I don't care about the actual graphics, I would much rather spend hours wandering around DC that Boston. There ia also a huge unpopulated part of the map (the radioactive part) with practically nothing in it because they ran out of time. Even in New Vegas there is a gate that you can not open and was never even added in in DLC.

I also don't like what Zenimax did to Obsidian either. I thought that was completely horrible. Instead of making an ally they have made an enemy. Instead of a follow up to NV we have had our noses rubbed in it with TOW, which if it had been another Fallout game would have been a million times better than FO4.

So, TL;DR? nothing really bad can come of this. Not IMO any way. Like I said in my deleted post (don't worry about it dude) you really can't stoop any lower than FO76 any way. The only way from that mess is upward.Quote
Reply