Emulation performance can now double in some instances

The Yuzu Switch Emulator has received its first major update of 2021, delivering major improvements to the emulator's performance and stability thanks to CPU emulation improvements and a major graphical rewrite.

With the latest version of Yuzu, the benefits of the emulator's recent Buffer Cache Rewrite (BCR) have been extended to the emulator's Vulkan version, and supports for new features within Vulkan have been implemented. New Vulkan API features are now part of the Yuzu emulation pipeline, accelerating its performance while requiring users of Intel, AMD and Nvidia GPUs to utilise each company's latest drivers to ensure compatibility.

Modern GPU features like FP16 software acceleration, as used by the Switch's Tegra X1 SoC, allows users of modern GPU architectures to benefit from a 2:1 performance increase over FP32 with certain floating-point calculations. This feature was added to AMD products with the RX Vega series, to Nvidia's Geforce lineup with Turing and Intel's Gen 9 and newer iGPUs. Yuzu's developers are also planning to utilise features like conservative rasterization to deliver further performance gains for new graphics cards.

Below is a chart from Yuzu which highlights the performance advantage of the latest version of Yuzu using the Vulkan API with a Ryzen 5 3400G APU, which features a Vega-based integrated graphics chip. Performance gains of greater than 2x are possible in some cases, making the emulator a lot more usable with low-end gaming systems. Add on Yuzu's improved rendering accuracy, and these changes are a clear win for PC's Switch emulator. 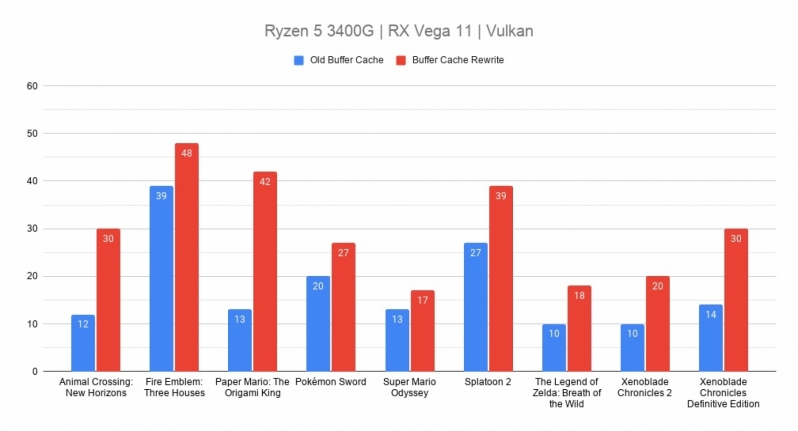 Below we also have a video from BSoD Gaming, who tested an early access version of this update with his RTX 3070-based PC. BSoD Gaming reported large performance gains and increased emulation accuracy with this update, making the Switch emulator more usable.

You can join the discussion on Yuzu's performance-enhancing emulator update on the OC3D Forums.

Bagpuss
Yeah,yeah...but when are they going to get with the times and put resolution upscaling in it?