Yuzu's latest update takes Switch Emulation to the next level

Yuzu's latest update takes Switch Emulation to the next level

Console emulation has drastically improved in recent years, so much so that it wouldn't be wrong to say that we are starting to enter a new golden age for game emulation. Yesterday, we talked about the latest improvements to RPCS3, the PS3 emulator, and today we need to talk about Yuzu, the Nintendo Switch emulator.

Yuzu's Project Hades has now been merged into the freely available version of the emulator, offering users improved game compatibility, improved emulator performance, and improved shader caching. Thanks to this update, more Switch games than ever are now fully playable through Yuzu, as documented by BSOD Gaming in the video below.

Project Hades was the codename for a full shader decompiler rewrite for the emulator. At the end of Project Hades comes the dawn of Project Reaper, a new effort to deliver CPU performance gains, unlimited framerate options on some Switch titles and a long list of other planned improvements. These changes include kernel changes, UI improvements, and a rewrite of the emulator's texture caching system.

In the future, Project Reaper plans to implement a VRAM cache garbage collection system to reduce VRAM use and prevent VRAM overutilisation. This should allow Yuzu to keep VRAM use between 2GB and 4GB and prevent games from crashing due to overly high levels of VRAM utilisation. Implementing a Windows feature called Fastmem into Yuzu will also significantly increase system performance. Yuzu's Project Reaper plans are documented here.

With project Hades, the Yuzu team has delivered the performance boosts shown below. Note that these performance gains are not the primary purpose of Project Hades, as the main goal of Yuzu's Shader Decompiler Rewrite was to improve emulation accuracy and increase game compatibility.

Another major benefit of this new version of Yuzu is that stuttering is a lot less frequent within the emulator when shaders caches are created. The saving of these shader caches will also boost game performance and prevent further stutters when the same data is reused. 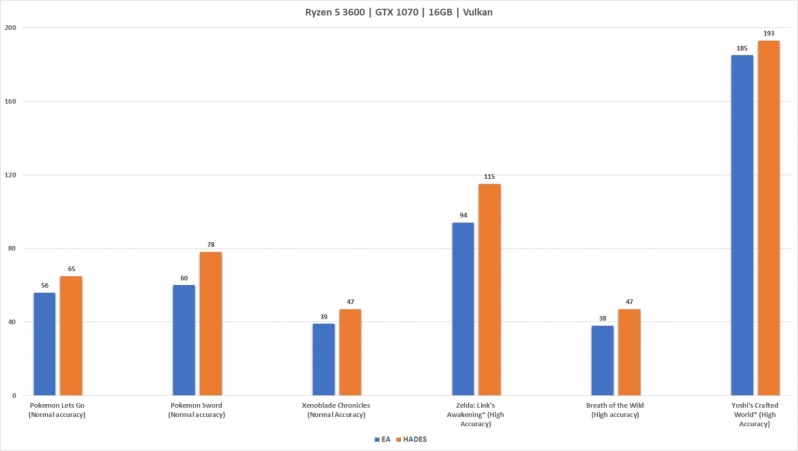 You can join the discussion on Yuzu's progress on the OC3D Forums.

Bagpuss
Now they just need to stop milking their Patreon funding and put resolution upscaling in it.


They just keep dangling that carrot in front of everyone to keep the money rolling in.