With their Project Nighthawk SSD, ADATA has utilised a Silicon Motion SM2508 SSD controller to to deliver read and write speeds of 14 GBps and 12 GBps, delivering two times the performance of many of today's PCIe 4.0 SSDs.

ADATA's second SSD prototype, their Project Blackbird SSD, delivers slower speeds of 14 GBps and 10 GBps, utilising an InnoGrit IG5666 SSD controller to do so. Both of these SSDs appear to have been tested using an Intel 12th Generation Alder Lake PC, as Intel is the only CPU manufacturer that has launched PCIe 5.0 compatible CPUs and motherboards.

At this time, ADATA has revealed no plans to commercialise their two prototype SSD designs, though it is likely that PCIe 5.0 SSDs will become available before the end of 2022.

Intel has already launched PCIe 5.0 compatible hardware, and AMD has confirmed that they plan to release PCIe 5.0 compatible AM5 series motherboards alongside their Ryzen 7000 series processors later this year. The PC industry is ready to move to PCIe 5.0 storage, and ADATA may be one of the first companies to launch consumer-oriented PCIe 5.0 SSDs. 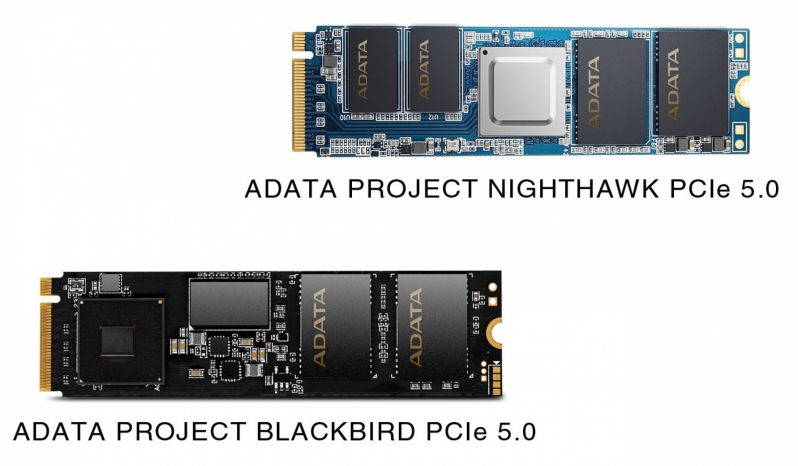 Both of ADATA's prototype SSDs are built using the latest NVMe 2.0 specification and are designed with per-drive capacities of 8 TB in mind. At this time, it is unknown what type of NAND is being used to create ADATA's "Project Nighthawk" and "Project Blackbird" series SSDs. NAND selection and controller choice both impact SSD performance, and it is unknown how much ADATA's chosen NAND has influenced the performance of their new PCIe 5.0 prototype SSDs.

You can join the discussion on ADATA's PCIe 5.0 SSD teasers on the OC3D Forums.