ASUS' M.2 Q-Latch system won't be on all of their Z590 motherboards, but they should be

Install an M.2 SSD without fiddly screws and tools

ASUS' M.2 Q-Latch system won't be on all of their Z590 motherboards, but they should be

M.2 SSDs have become incredibly popular amongst today's PC builders; offering read/write speeds that can be more than 10x faster than SATA SSDs thanks to the powers of PCIe 4.0 and the potency of modern NAND tech and SSD controllers. NVMe SSDs offer the best storage performance on the market today, but with that performance comes fiddly screws and annoying installs, until now.

With their Z590 motherboard lineup, ASUS will be offering their users a new M.2 installation system called Q-Latch, allowing M.2 SSDs to be installed toollessly. M.2 SSD counts typically use small Philips head screws which are easy to drop and lose during installs, making their installation one of the most annoying aspects of modern PC builds. With Q-Latch that changes, and that is good news for everyone.

Sadly, ASUS' Q-Latch system will not be available on all of their Z590 products, though they are due to be part of many of the company's new ROG, Prime and TUF series products. While we feel that ASUS should adopt their Q-Latch system across their entire Z590 product line, we are happy to see it included on many of their more mainstream designs.

ROG is bringing innovation to our motherboards, to make your life easier!

The innovative Q-Latch makes it easy to change an M.2 SSD without the need for tools. Secure the drive neatly without any extra screws!????#ROG #AImotherboard #ASUSZ590https://t.co/y28Tpely5a pic.twitter.com/WokQNDM84N

At OC3D, we are happy to see anything that can make the PC building process easier and more hassle-free. ASUS' Q-Latch system is something that does exactly that. While Q-Latch solves what many would define as a "first world problem", anyone who has lost and M.2 screw will know how handy this new feature is.

You can join the discussion on ASUS' M.2 Q-Latch system on the OC3D Forums. 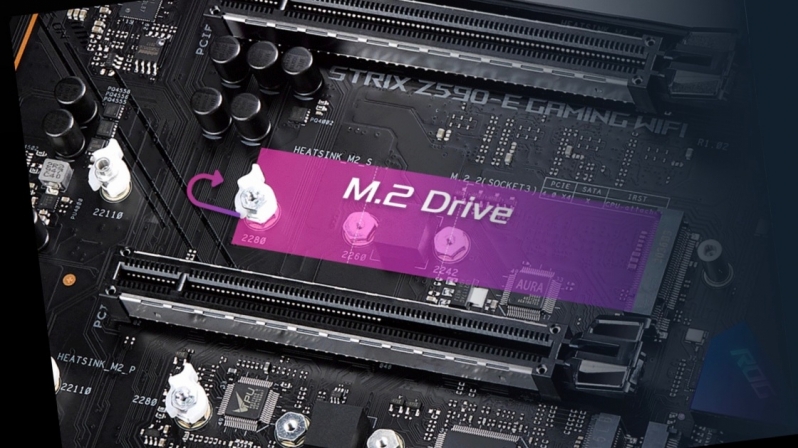