The ROGT Strix SQ7 is a M.2 NVMe SSD that is based on Phison's E18 SSD controller, which is already uses in high-end SSDs from companies like Corsair, Sabrent, Kingston, MSI, and Gigabyte. Based on the image below, ASUS appears to be using Micron's 176-layer 3D TLC NAND with their ROG Strix SQ7 SSD, and are pairing the drive with a DDR4 memory buffer. 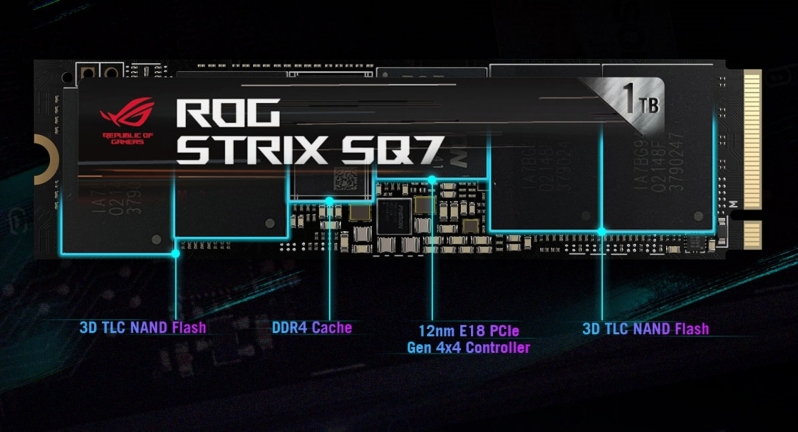 Being a PCIe 4.0 M.2 2280 SSD with that offers sequential read speeds of 7,000 MB/s the ROG Strix SQ7 is an SSD that is compatible with a large variety of modern devices, from desktop PCs to laptops and even Sony's PlayStation 5 console.

Sadly, ASUS has not commented on the retail availability and pricing of their new ROG Strix SQ7 SSD, or revealed versions of the drive that offer capacity options of over 1TB.

You can join the discussion on ASUS' ROG Strix SQ7 M.2 NVMe SSD on the OC3D Forums.

robbiec
That was the final piece of the jigsaw? You can build yourself an Asus PC from scratch now with exception of memory and cpu. Case, fans, cooling, psu, motherboard, gpu, storage, display, keyboard, mouse and headset.Quote

Damien c
Will be interesting to see how long it last's, I know it's basically made by another company but Asus and "Long Life" do not go well in the same sentence from my experience.

I still only have 1 Asus product that is working and that is a old P8P67 Pro motherboard with a 2700k in it, everything I have that is newer than that has died most often within a month or two of the warranty running out.Quote

66racer
Quote:
Seriously, COULD be the quality of the electricity in your home/office.Quote

NeverBackDown
Quote:
He'd have multiple other issues showing if that were the caseQuote

AngryGoldfish
I don't know if ASUS products are statistically more likely to break than any other company. Everyone has at least one horror story out there. Countless people say things like, 'I'd never buy an ASUS motherboard ever again.' Or, 'I wouldn't touch a Gigabyte GPU with a 10 foot barge poll.' Eventually you'd run out of companies if you listened to all the horror stories. It's more likely coincidental that you've had poor products from one specific or multiple companies. Maybe ASUS have lower tolerances, but I've never seen a study or statistic showing that; just random anecdotes that we all have for every company.Quote
Reply