Corsair's getting ready to launch a new PCIe 5.0 storage drive called the MP700, a NVMe 2.0 M.2 SSD that promises to deliver sequential read speeds of up to 10,000 MB/s and sequential write speeds of up to 9,500 MB/s. Corsair has already confirmed that this new SSD is AM5 compatible, making this SSD ready for AMD's Ryzen 7000 series processors.

Today's PCIe 4.0 SSDs can deliver sequential read speeds that surpass 7,000 MB/s, but Corsair's earliest PCIe 5.0 drive smashes those speeds by reaching to 10,000 MB/s barrier. That means that this SSD can deliver speeds that are up to 3,000 MB/s faster. In other words, Corsair's newest M.2 SSD is around 40% faster than its predecessor.

Below is what Corsair has had to say about their MP700 PCIe 5.0 SSD.

Experience the performance of PCIe Gen5 storage in your AM5 system with the upcoming CORSAIR MP700 Gen5 PCIe x4 NVMe 2.0 M.2 SSD, providing up to 10,000MB/sec sequential read and 9,500MB/sec sequential write speeds depending on the model. 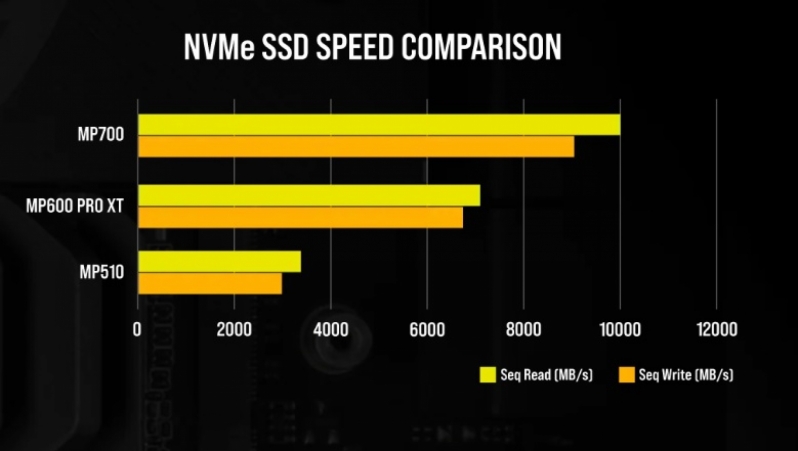 We expect Corsair to reveal more details about their MP700 SSD when AMD reveals their Ryzen 7000 series processors on August 29th. With AM5, AMD will be delivering PCIe 5.0 support to a huge range of motherboards, with all B650 or higher motherboards featuring a PCIe 5.0 M.2 slot (or more). Once Corsair officially unveils their MP700 SSD, we expect to learn details about this drive like its NAND manufacturer and its SSD controller.

You can join the discussion on Corsair's MP700 SSD on the OC3D Forums.