GPUs can decompress nearly 3x faster than CPUs, and free up CPU headroom for other tasks

DirectStorage 1.1 is coming soon, and it will add GPU-based decompression to dramatically speed up loading times

Microsoft launched their DirectStorage 1.0 technology earlier this year, but it was missing some key components. DirectStorage is designed to accelerate the performance of storage inside modern PC and consoles, with high-end NVMe SSDs being Microsoft's primary area of focus.

DirectStorage 1.0 is designed to eliminate many of the bottlenecks that can lower storage performance, enabling faster game loading times and better utilisation of modern SSDs. The problem with DirectStorage 1.0 is that is only offers support for decompression on CPUs, leaving plenty of room for additional acceleration.

What does DirectStorage 1.0 do?

DirectStorage 1.0 is designed to improve the data transfer speeds of applications, allowing users of high-end NVMe storage devices to make use of the higher levels of bandwidth offered by their hardware. When combined with the storage improvements that Microsoft has included with Windows 11, Microsoft has claimed that DirectStorage 1.0 can shorten loading times by up to 40%.

Now that Microsoft has given developers full access to the performance of modern storage devices, developers now want ways to make use of this data in a more efficient manner. Having access to this level of bandwidth is not useful when fully utilising it will force high decompression loads on your processor. This is why Microsoft has decided to focus on data decompression with DirectStorage 1.1.

How does DirectStorage 1.1 improve things further?

Let's face it, GPUs have seen their performance levels increase at a much faster rate than CPUs. With this in mind, it makes sense for developers to offload CPU related tasks onto GPUs whenever possible. With DirectStorage 1.1, Microsoft has added support for GPU decompression, which allows scenes to loads nearly 3x faster than CPU decompression.

Developers can use DirectStorage 1.1 to deliver ultra-fast loading times and to allow more assets to be streamed into games on-the-fly. This is a big deal for fast-paced games and large open-world titles where game worlds can change at an ultra-fast pace. 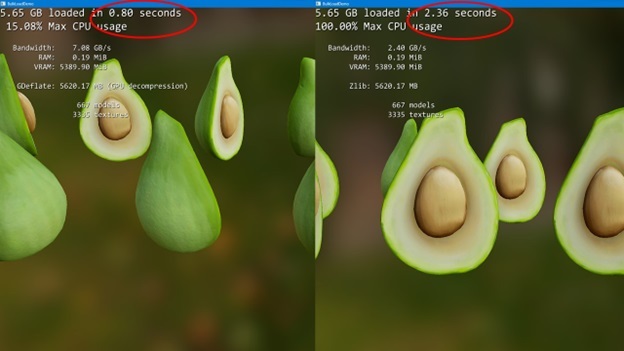 DirectStorage 1.1 will help to make future games less CPU-limited and allow games to load significantly faster. In time, GPU manufacturers could also add specific hardware that is dedicated to GPU decompression, taking load off their shaders and compute units to eliminate DirectStorage's impact on GPU performance.

With DirectStorage, Microsoft is giving developers space to innovate with their future games by effectively removing loading times and data streaming bottlenecks that could inhibit their creativity. In time, we expect DirectStorage to evolve further, and for developers to make creative use of its feature set.

You can join the discussion on DirectStorage 1.1 on the OC3D Forums.

Dicehunter
Good to see progress but we still don't have a single game with DS 1.0 nevermind 1.1

dazbobaby
Quote:
I was going to ask if it's worth it. Being on windows 10 I have no access to it, now I see it's not worth the hassle upgrading.Quote

meuvoy
Quote:
Dorectstora 1.0 is just more work for developers with no real performance gains... Basically it's nothing, no one understands why Microsoft released it. It simply doesn't support hardware acceleration so what's the point?

That's mainly the reason nothing uses DS1.0 but plenty Xbox games are using Xbox's implementation of it, and yes it does support hardware acceleration from launch on console... You can clearly see how Microsoft likes PC gamers.Quote

looz
Quote:
Huh, one would have thought implementing the Xbox equivalent would make enabling the PC DirectStorage easy, if it doesn't carry over then that's quite silly indeed. Are you sure it's not just due to long development cycles?

But I guess large open world releases will make use of it.Quote

NeverBackDown
It's only been available to developers since March 14th 2022. Not many big games have released since then. Makes sense not widely used.Quote
Reply