It may not be liquid cooled, but it is fancy

EK Water Blocks, the Slovenia-based premium PC liquid cooling gear manufacturer, launched its first heatsinks for M.2 NVMe SSDs five years ago. Since then, EK has sold over one hundred thousand of those units and gained a reputation for producing efficient passive cooling solutions for M.2 SSDs. This reputation led to collaborations with leading storage manufacturers, the latest being Seagate, and the development of a heatsink for FireCuda 530 SSD, which found its home in many gaming PCs and even PlayStation 5 consoles.

With SSDs having no intention of getting slower, only faster, the need for SSD cooling solutions will only grow, and EK has prepared a new heatsink, the EK-Quantum Convection M.2 NVMe, as part of the Quantum product line. The redesign didn't only bring aesthetic changes but also one very important functional update. As M.2 SSDs are getting faster, they are also gaining on capacity and using a double-sided layout. And that is where the EK-Quantum Convection M.2 NVMe has the upper hand. 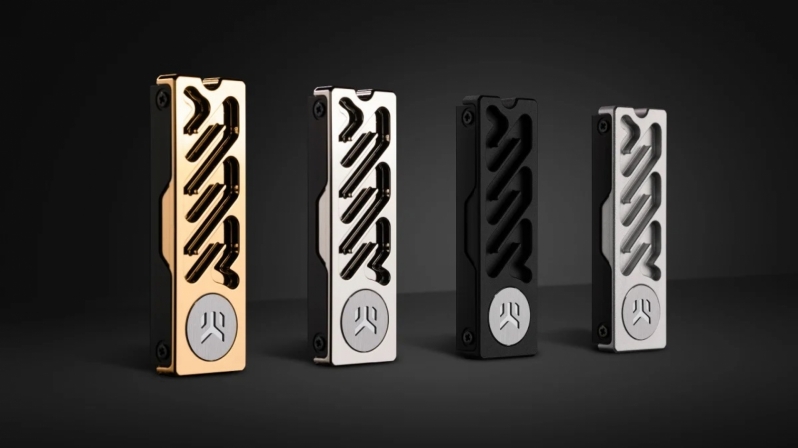 The EK-Quantum Convection M.2 NVMe is a passive aluminium heatsink for M.2 NVMe solid state drives. Although it's not a water cooling component, it is a much-needed aesthetic and cooling solution for many PC owners. It's no secret that M.2 NVMe SSDs can quickly overheat and be subdued to thermal throttling, thus losing performance. However, the new heatsink from EK will completely prevent thermal throttling in cases with sufficient airflow or otherwise significantly prolong the time before thermal throttling of the SSD occurs.

It is built from high-grade aluminium and is available in four distinctive finishes. With its unique Quantum-like design, this heatsink will be the perfect addition to your build. The four available finishes - gold, black, nickel, and silver - will perfectly match other EK Quantum line products like Torque fittings, pump covers, backplates, etc.

What Is a Single and What Is a Double-Sided M.2 SSD?

Single-sided M.2 NVMe SSDs only have chips on one side of the PCB. This means all the storage and controller electronics are placed on one side of the drive, hence the name, single-sided. These drives are smaller and generate less heat. Double-sided M.2 NVMe drives have chips on both sides of the PCB. These drives usually offer more storage capacity by adding flash memory storage chips on both sides of the drive.

These premium M.2 NVMe solid state drive heatsinks are made in Slovenia, Europe, and are now available for purchase through EK Webshop and partner reseller network. The table below shows the manufacturer's suggested retail price (MSRP), VAT included. 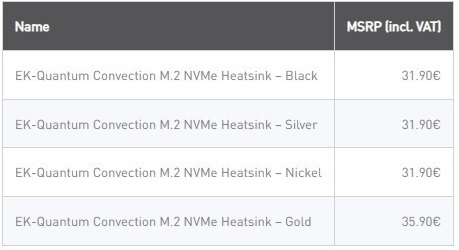 You can join the discussion on EK's new premium M.2 SSD heatsinks on the OC3D Forums.