These M.2 drives will operate at PCIe 3.0 2x speeds, placing these drives in the mid-high-end performance category, exceeding the throughput of SATA SSDs while remaining far from premium tier PCIe 4x SSDs like Samsung's 970 PRO or EVO drives.

Gigabyte's new SSDs will offer capacity options of 128GB and 256GB, with a larger 512GB drive being planned for a future release. Both the 128GB and 256GB drives will provide users with a three-year warranty, assuming that users do not pass the drive's maximum write limit (TBW), which is 100 TB and 200TB for the 128GB and 256GB models respectively. 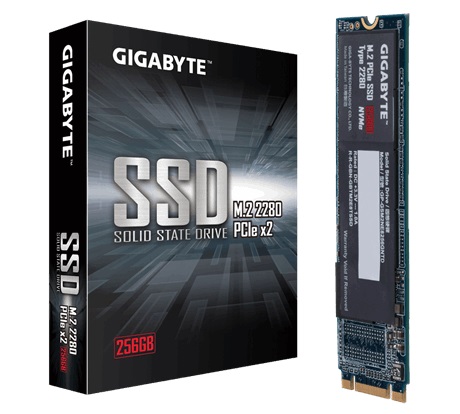 These PCIe M.2 NVMe SSDs are expected to release with price tags of $49.99 and $69.99 respectively for 128GB and 256GB capacity options respectively.

You can join the discussion on Gigabyte's low-cost M.2 PCI NVMe SSDs on the OC3D Forums.

NeverBackDown
Two things against this.
1: It's Gigabyte. Don't trust them seeing as they don't really care about there motherboard BIOS's
2: Not much more to get an x4 drive and the speed increases definitely make it worth it.Quote

Dawelio
Quote:
Haha the first one and the first senctence in that one was everything I thought.Quote
Reply