Want to push PCIe 5.0 to its limits? Aorus has the product for you

PCIe 5.0 connectivity is going to be a connectivity game-changer, offering PC users more bandwidth for massive file transfers and next-generation component communication. PCIe 5.0 offers a 2x bandwidth increase over PCIe 4.0, enabling the creation of faster storage devices, and snappier PCs. Beyond that, Gigabyte is taking PCIe 5.0 storage to the next level with their AORUS Gen5 add-on card.

With four integrate PCIe 5.0 M.2 slots, the Gigabyte Aorus Gen5 add-on card has the potential to deliver 60GB/s of total bandwidth. This card can allow four PCIe 5.0 devices to work together to deliver staggering storage speeds, pushing consumer storage devices to their limits. The device's integrated heatsink and fans will also allow contained storage devices to remain cool under heavy loads, preventing thermal throttling under the heaviest of storage workloads

The only downside of this storage device is that it needs access to a PCIe 5.0 16x slot to enable the device's full potential. This device has the potential to enable 60 GB/s transfer speeds, assuming that the storage drives within it are fast enough to saturate the PCIe 5.0 x4 PCIe 5.0 slots within. Using a PCIe 5.0 16x slot for storage would not be a good idea for consumer-grade gaming systems, as these slots are often best used with high performance graphics cards.

Below we have included Gigabyte's Press Release for their 60GB/s Aorus Gen5 AIC. 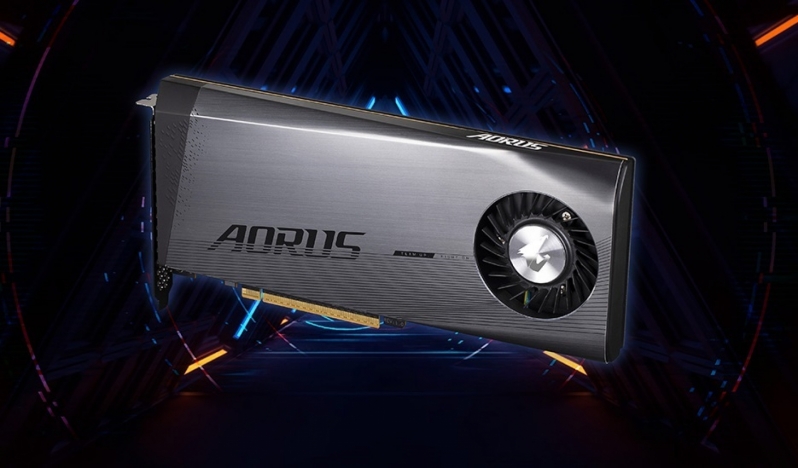 GIGABYTE TECHNOLOGY Co. Ltd, a leading manufacturer of motherboards, graphics cards, and hardware solutions announced the AORUS Gen5 AIC Adaptor with PCIe 5.0 support. It is a single-slot Add In Card, featuring four NVMe M.2 slots, supporting a maximum of four PCIe 5.0 SSDs with 16 TB storage. By configuring a RAID array, the bandwidth can boost up to 60 GB/s to allow massive data files to transfer in a snap. The eight integrated temperature sensors and active temperature-controlled double ball bearing fan should satisfy users with large-capacity, ultra-fast and ultra-cool data access.

The design of independent PCIe 5.0 controller paired with an exclusive signal-stabilized controller ensures that each SSD operates with actual PCIe 5.0 bandwidth to provide stable and high-speed performance. AORUS Gen5 AIC Adaptor supports PCIe 5.0 interface and is backward compatible with PCIe 4.0/3.0, unleashing the optimal performance of the platform regardless of its generation. Users can also increase system performance to the maximum 60 GB/s bandwidth by configuring RAID with additional NVMe M.2 SSD. GIGABYTE's new generation of Intel and AMD motherboards, Z690 or above, feature PCIe 5.0 support, low impedance, and server-grade PCB design, boost PCIe storage performance by leveling up bandwidth while unleashing hidden performance from peripherals. Get ready to break the limit with AORUS Gen5 AIC Adaptor and enjoy the ride of PCIe 5.0.

You can join the discussion on Gigabyte's 60GB/s Aorus Gen5 adaptor on the OC3D Forums.