Modern M.2 NVMe SSDs are fast, but there will always be those that need to push the system storage performance envelope with RAID configurations and the latest and greatest PCIe SSDs.
Today most motherboards offer a limited number of M.2 slots, which are often restricted in such a way that makes M.2 RAID configurations difficult to build/use, especially when using more than two M.2 storage devices. HighPoint, a popular creator of workstation grade storage solutions, has now announced their new SSD7101 series of PCIe 3.0 x16 NVMe RAID SSDs, which can use up to four NVMe SSDs in RAID 0, 1 or 5 to offer some insane levels of storage performance.
This new series of SSDs will come with up to four Samsung 960 series SSDs build into the device, with the SSD7101A featuring Samsung 960 Evo series SSDs and the SSD7101B using Samsung 960 Pro series SSDs. These new SSDs will offer sequential read/write speeds of 13000MBps/7500MB/s and 13500MBps/8000MBps respectively, with the SSB7101B offering 33% higher levels of endurance.
Users of this SSD will be able to halve the capacity and double the endurance of this SSD by running n RAID 1 mode, with each SSD in this unit coming with an aluminium fin cooling solution that is cooled by the SSD7101's single fan. 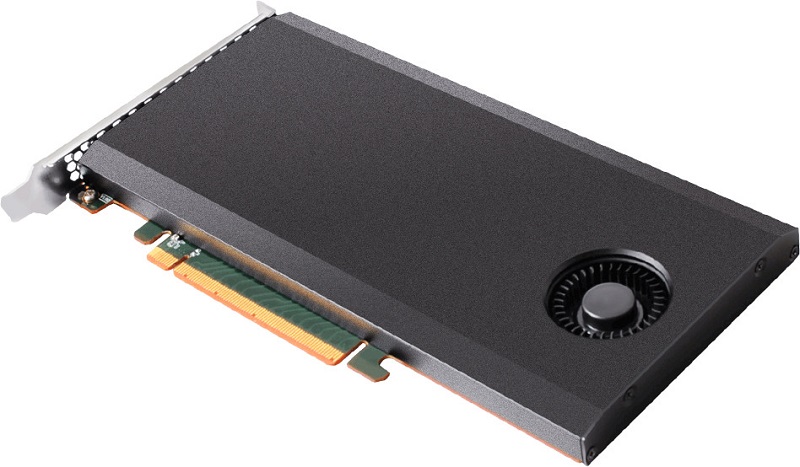 Highpoint has not released the pricing of these new NVMe SSDs, though more information is expected to be revealed at Computex 2017.

You can join the discussion on HighPoint's new SSD7101 series of RAIDed M.2 SSDs on the OC3D Forums.

AlienALX
I bet that fan is annoying

tinytomlogan
It looks like some weird photoshopped Nvidia card...... :/Quote

Chopper3
I've been testing NVMe RAID chips for servers from LSI and as such I'd be interested in seeing the performance in R0, R1 and, if available, JBOD mode (using software R0/R1 such as Storage Spaces) to see if they matched my findings. The best I've managed was a HPE DL380 Gen9 with 6 x 2TB NVMe hot-pluggable drives running off a x16 slot card - I never got more than 10.2GBps for 4k sequential writes in Server 2016, the random writes was more impressive but nothing compared to that seen with Optane.Quote
Reply