Is Optane + QLC the way forward?

The Future is Fusion. Yes, that's an old AMD tagline, but it's an appropriate one given the situation. Sometimes a hybrid approach is needed, as while some technologies are clearly better than others, pricing and other factors will often present the "best" solution from seeing widespread adoption.
In the storage market, it is easy to see why Intel's Optane/XPoint memory is an innovative addition to the market. Its low latency throughout and high-performance levels at low queue depths can leave SSDs in the dust in specific workloads, traits which have enabled the new memory type to take on DRAM in specific applications.

Sadly, while 3D XPoint memory is less latent and often faster than NAND, the cost of this new memory type is higher, leaving consumers in a position where XPoint/Optane are not viable options for mainstream storage solutions. That said, Intel wants its customers to benefit from Optane, and to do that the company has taken a hybrid approach to storage. With their new Optane H10, Intel plans to bring ultra-fast Optane memory and affordable QLC NAND together to create an SSD that offers the best of both worlds in terms of performance.

Ever since we first saw Optane memory hit the market, there has been speculation that the new memory standard would become the cache of choice for future SSDs, offering ultra-fast, low-latency performance while lacking the volatility of DRAM. Now we are finally seeing this dream coming to fruition at Intel. 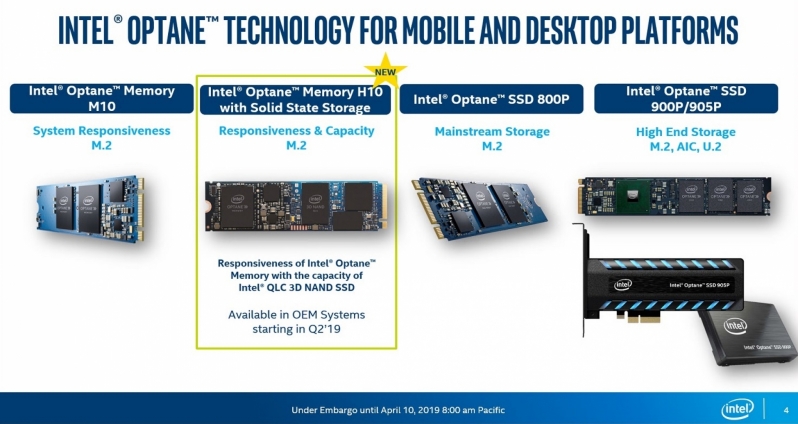 In basic terms, Intel's Optane H10 is a hybrid device which merges Intel's 660p QLC SSD and an Optane system accelerator into a single device, packing up to 1TB of QLC SSD storage and 32GB of Optane memory in a single 2280 M.2 NVMe device.

While the Optane H10 uses a PCIe 3.0 4x interface, both the Optane and QLC portions of this device operate using two lanes each, with the SSD relying on Intel's RST software to allocate data to the SSD's Optane cache. In short, this device has its limitations, which is why Intel is launching it as an OEM only product.

Intel plans to launch products which use their Optane H10 SSD in Q2 2019, though at this time Intel has no plans to release the product to PC building consumers. Intel has confirmed that Best Buy will start selling OEM systems with Optane H10 SSDs in Q2, with manufacturers which include ASUS, Dell and HP. 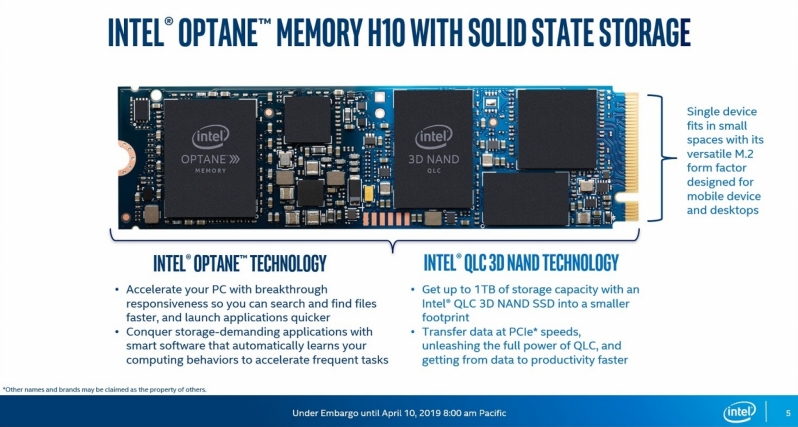 The reality of this Optane H10 is that the device is a two-in-one in a literal sense, as the storage device will not function correctly without Intel's RST driver. This means that the Optane H10 will only operate on systems which support RST and Optane Acceleration/Cache drives, which makes the Optane H10 a no-go on AMD systems and older Intel platforms. This is one of the primary reasons why the Optane H10 will be an OEM only product at launch.

Even with this limitation, it is hard to deny that the Optane H10 isn't a compelling device, as the promise of high-performance levels at low queue depths is a big deal for a modern SSD, especially for a drive with capacity optimised QLC NAND. In effect, Intel's Optane memory counteracts the weaknesses of QLC NAND, while also enabling the drive to offer performance levels that exceed all-NAND SSDs at low queue depths. 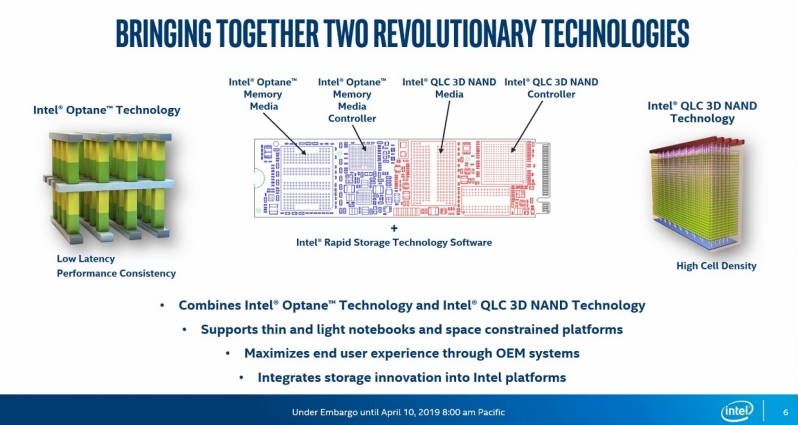 One of the best aspects of Intel's Optane H10 is its performance at low queue depths, as Intel's XPoint memory allows the drive to deliver heightened performance in commonly used applications. This is what allows Optane-based SSDs to appear faster than both SATA-based and NVMe-based SSDs, despite the smaller performance gap at high queue depths.

Think of it this way; imagine a cashier at a supermarket and a queue of customers. There are two ways of working through that queue fasters; 1, you can get a faster cashier and two, you can create a second queue and hire a second cashier. In most common PC workloads there are not many data queues running concurrently, a factor which allows Optane's high speeds at low queue depths make systems feel noticeably faster. 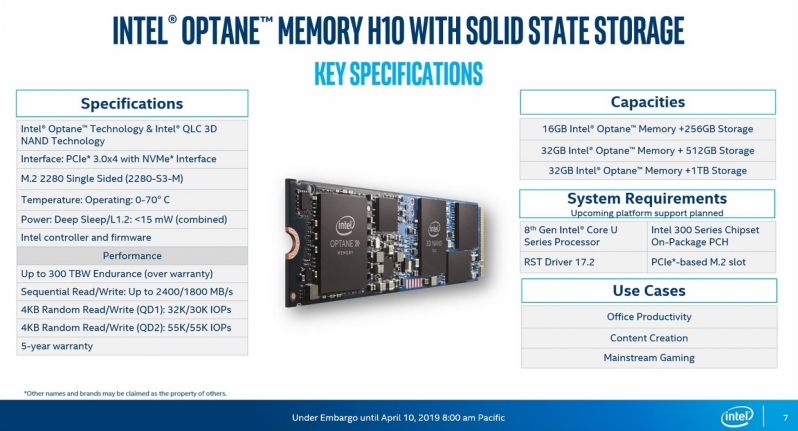 Below are a few benchmarks which were provided by Intel which showcases the read/write queue depths that are common when starting up applications. Notice that most of them use low queue depths when reading/writing data. Typically, SSDs are marketed with performance specifications that are using queue depths of 32, which are rarely seen in common workloads.

Thanks to their high-performance levels at low queue depths, Intel claims that their Optane memory can speed up 90% of applications and deliver better performance than most commonly used solid state drives.

With the Optane H10 using data caching, it must be remembered that not all of the H10's data will be stored on Optane memory. Even so, Intel's caching algorithm will keep commonly used data on Optane storage, which will allow the drive to accelerate a system's most important applications. 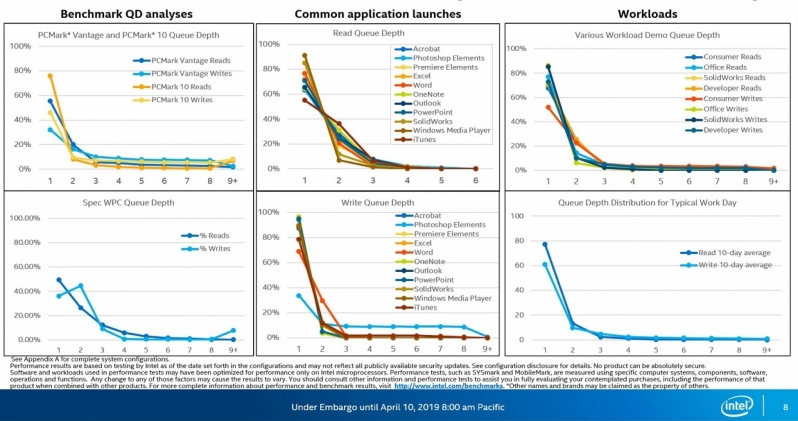 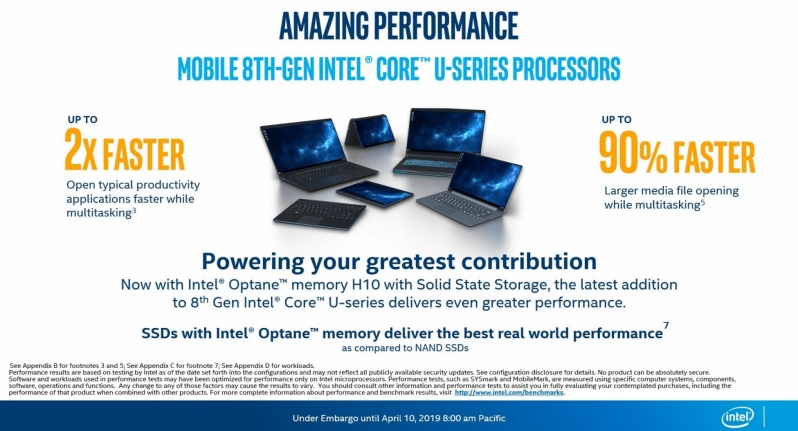 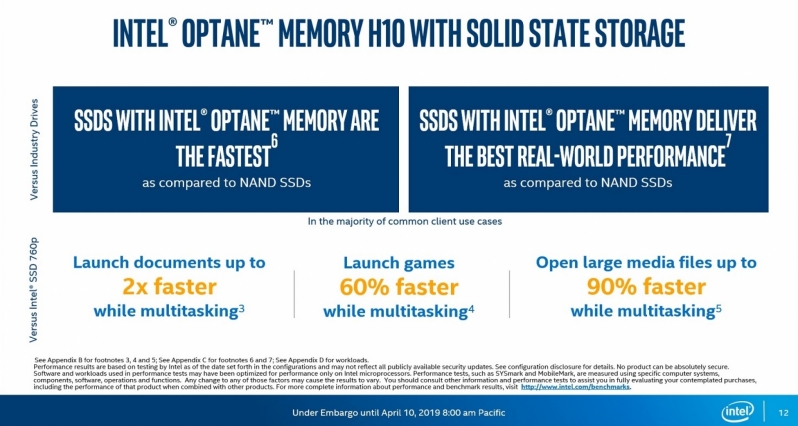 So is the Optane H10 the future of SSD storage? Well, we can't honestly say without dedicated testing. Regardless, Intel's hybrid storage solution appears to be the smart way forward given the pricing of Optane memory, enabling consumers to take advantage of the memory type without incurring an insane price premium.

On the topic of thermals, Intel has stated that their Optane H10 sits within the power envelopes of the M.2 specification that that their Optane H10 SSD should not throttle under consumer workloads. That said, throttling may occur during extended workloads, workloads which are almost exclusive to extended SSD benchmarking sessions and should never be expereinced by consumers. 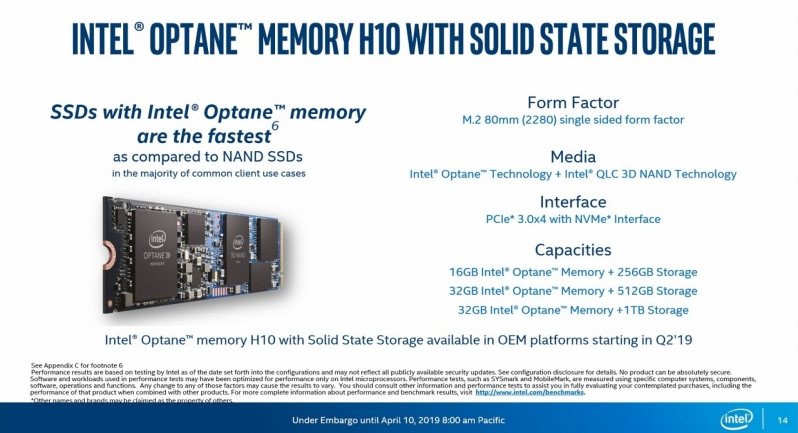 In short, Intel's Optane H10 is an intelligent solution to many storage problems, but its lack of mainstream availability and the fact that it is tied to Intel's RST drivers will limit the SSD's overall potential. Even so, this SSD should prove to be a great solution for the OEMs who take advantage of it.

You can join the discussion on Intel's Optane H10 series of SSDs on the OC3D Forums.

demonking
No AMD support? Time for Micron to jump into bed with AMD then and use their part of this tech.Quote

WYP
Quote:
TBH I do wonder what Micron's plans are for XPoint. I suspect that Intel wants to go more down the DRAM route with Optane, which could be a reason behind their split with Micron for 3rd Generation Optane.

It is strange that XPoint isn't in any Micron SSDs, TBH I would love to see a Crucial drive make use of an Optane Cache.Quote

NeverBackDown
Optane would just be a more expensive SLC alternative. Albeit still faster and lower latency. Not sure if it would really help the super fast NVMe drives.Quote
Reply