Intel is set to expand their NAND-based SSD offerings

2018 is already set to be the year of NVMe, with almost every major SSD manufacturer showing off or launching new high-speed SSD offerings at CES. Now Intel is set to launch several new NVMe SSD offerings, both to service the high-performance and cost-effective NVMe segments of the market with new 760p and 660p offerings.

These two SSDs will be manufactured using Intel's 64-layer 3D NAND technology, with the 760p utilising TLC (triple-level-cell) NAND while the 660p uses QLC (quad-level-cell) NAND. The 660p will be Intel's first QLC NAND product, which is designed to offer lower pricing by providing higher levels of capacity per storage cell.

The Intel 760p will be the company's new high-end NAND-based SSD offering, utilising 64-layer TLC-NAND to deliver capacities of 128GB to 2TB while offering read/write speeds of 3200/1600MB/s and providing 4K random read/write performance of 350,000/280,000 IOPS. These performance levels give the 760p similar throughput to many new SSDs based on the Silicon Motion SM2262 controller, placing this drive within striking range of the Samsung 960 Evo. 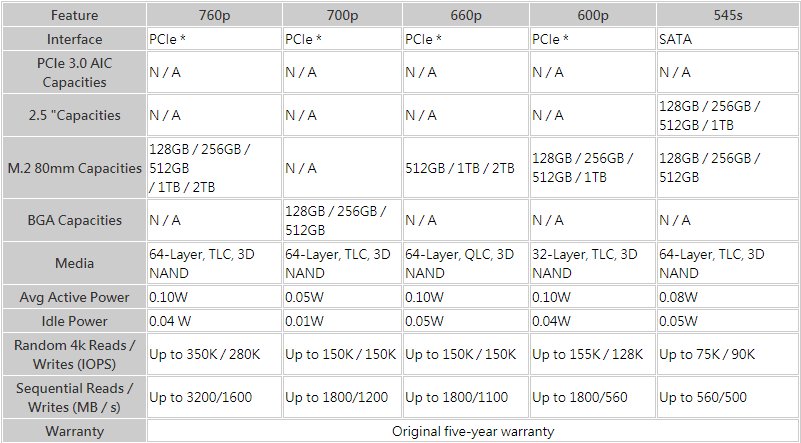 The second, and most interesting, leak is the existence of the Intel 660p, which delivers high storage capacities of 512GB, 1TB and 2TB and some impressive storage levels for what is expected to be a low-cost storage drive. This 660p offers performance levels that are well in excess what some existing low-end TLC NVMe drives offering today, while also utilising low-cost QLC NAND with a 5-year warranty.

Today, the only thing holding back QLC memory is the lack of controllers that support the new NAND type, preventing the low-cost NAND type from being usable by a large number of today's SSD manufacturers. QLC NAND offers a 33% increase in storage capacity per cell over TLC NAND, providing a lot of potential for cost savings when creating large SSDs.

You can join the discussion on Intel's upcoming 760p and 660p series of SSDs on the OC3D Forums.

looz
Nice, I doubt they can give these ridiculous price tags either since Samsung is basically right at their heels.Quote
Reply