This is the best PCIe 4.0 SSD that Kingston has to offer

Kingston has just released their new flagship SSD, the KC3000, a PCIe 4.0 drive that can deliver sequential read and write speeds as high as 7,000 MB/s. Like many of its competitors, Kingston's KC3000 drive utilises Phison's E18 SSD controller and uses Micron's 176-layer TLC NAND to deliver its high levels of performance and capacities of up to 4TB.

According to Kingston, their KC3000 SSDs targets demanding use cases like 3D rendering, 4K+ content creation, and other high-end software applications that benefit from ultra-fast storage. This SSD is also overlaid with a graphene aluminium heat spreader that allows this SSD to remain cool under load while retaining its compact M.2 form factor.

With a 4TB option and relatively high endurance ratings compared to many competitors, Kingston's KC3000 SSD will appeal to users who want larger capacity drives and SSDs with high levels of wear resistance.  If you plan on frequently re-writing your SSD, Kingston's KC3000 may be more appealing than many of today's other PCIe 4.0 SSD offerings.

Below are the full specifications of Kingston's KC3000 PCIe 4.0 SSD models.

What follows is Kingston's Press Release for their KC3000 SSD launch. 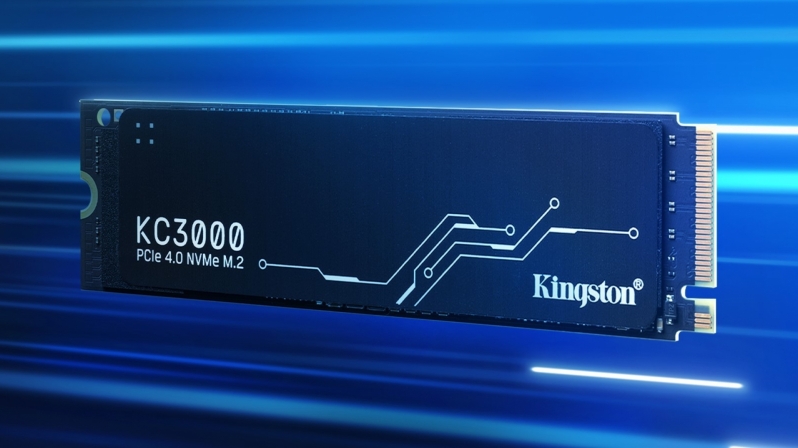 By leveraging Gen4 technology, KC3000 delivers speeds up to 7,0000/7,000 MB/s read/write of blazing-fast performance and full capacities up to 4096GB2 for optimal storage. Users can keep up with demanding workloads and experience better performance with software applications such as 3D rendering and 4K+ content creation by upgrading the systems storage. KC3000 is built with high-density 3D TLC NAND housed in the industry standard M.2 2280 form factor to store even more and enable users to take advantage of PCIe 4.0 speeds. With the combination of performance and endurance, KC3000 is reinforced with a low profile, graphene aluminium heatspreader to effectively disperse heat and keep your drive cool during intensive workloads.

"With the rise of data-heavy applications, consumers are demanding high performance solutions and high capacities to match," said Keith Schimmenti, SSD Business Manager, Kingston. "By utilising next-gen PCIe 4.0 technology with KC3000, we are able to deliver fast and reliable storage to suit the needs of a wide range of consumers in the market."

You can join the discussion on Kingston's KC3000 PCIe 4.0 SSD on the OC3D Forums.