NAND Flash Contract Prices are set to Rise this Quarter

NAND Flash Contract Prices are set to Rise this Quarter

Memory pricing is set to increase this quarter, as NAND flash makers are seeing heightened demand thanks to high laptop sales, increased server demand and increasing sales for SD cards and flash drives.

Trendforce has reported that NAND flash prices are due to rise by 5-10%, with enterprise-grade SSDs seeing the largest potential price increase with expected price increases of up to 15%.

With consoles shifting to SSD technology and increasing SSD market share within the laptop market, it is easy to see why NAND supplies are constrained. Rising per-drive storage capacities have also caused NAND supply to shrink. That said, SSD controllers appear to be more limited in supply than NAND flash, and that factor is helping to increase the memory densities of mainstream SSDs. The good news is that this is allowing 256GB drives to replace 128GB drives in many budget-oriented notebooks, but the bad news is that this is helping to increase NAND flash demand.

Thankfully, rises in NAND contract prices often take a while to materialise at retailers, as it will take a while for higher-cost NAND to be delivered to manufacturers and fed into the retailers in the form of new laptops, PCs or standalone SSD products.

While higher prices are a bad thing for consumers, the laws of supply and demand apply. Companies are in the business of making money, and while we would like to see SSD prices fall, the reality of the situation is that it is not in the best interest of NAND manufacturers to sell their products at the lowest possible price. Perhaps now is the time to invest in a new SSD, as prices could start to rise this quarter.

Below is Trendforce's Press Release and NAND Flash Pricing Forecast. 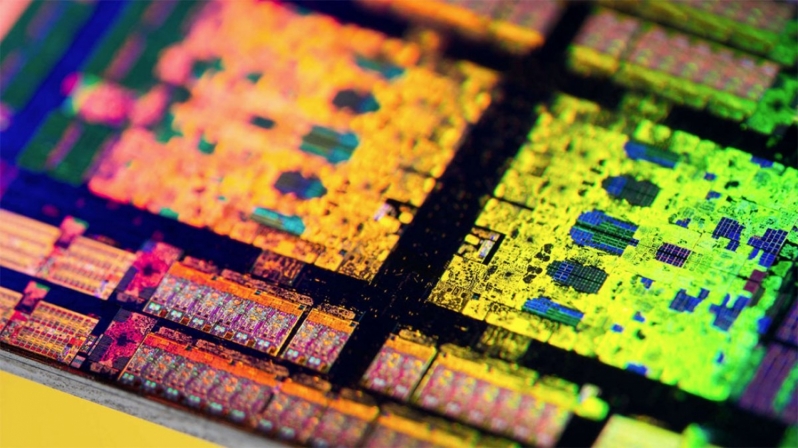 The recent wave of COVID-19 outbreaks in India has weakened sales of retail storage products such as memory cards and USB drives, according to TrendForce’s latest investigations. However, demand remains fairly strong in the main application segments due to the arrival of the traditional peak season and the growth in the procurement related to data centers. Hence, the sufficiency ratio of the entire market has declined further. NAND Flash suppliers have kept their inventories at a healthy level thanks to clients’ stock-up activities during the past several quarters. Moreover, the ongoing shortage of NAND Flash controller ICs continues to affect the production of finished storage products. Taking account of these demand-side and supply-side factors, TrendForce forecasts that contract prices of NAND Flash products will rise marginally for 3Q21, with QoQ increases in the range of 5-10%.

Several developments are expected to drive up client SSD demand in 3Q21. First of all, high demand for notebook computers at the moment has prompted notebook brands to maximize their production. Furthermore, the release of CPUs based on Intel’s new Ice Lake platform is pushing up the SSD adoption rate. At the same time, the average memory density of SSDs is increasing as NAND Flash suppliers experience tightening supply of SSD controller ICs. On the supply side, as server shipments regain their former momentum and thereby significantly expand enterprise SSD procurement, the supply of NAND Flash will likely further tighten as a result, with NAND Flash suppliers now less willing to lower their prices when negotiating quarterly contracts. On the other hand, NAND Flash suppliers also launched SSDs with higher-layered NAND Flash in 2Q21 in order to capture market share. For instance, their main offerings have rapidly transitioned to 128L NAND Flash. As suppliers raise production capacity for higher-layered products, the downward pressure on contract prices also becomes greater. Hence, TrendForce forecasts that contract prices of client SSDs will rise by around 3-8% QoQ for 3Q21, showing a more moderate increase compared with 2Q21.

Stock-up activities for enterprise SSDs rebounded in the data center segment in 2Q21 after nearly three quarters of inventory adjustments. The overall server procurement has also been growing over the quarters as government agencies and SMBs release tenders related to digital infrastructure. Moreover, TrendForce has observed that the market release of server CPUs based on Intel’s new Ice Lake platform has led to an increase in the procurement capacity for enterprise SSDs. Quotes for enterprise SSDs are expected to rise again for 3Q21 contracts. NAND Flash suppliers are carrying just around 4-5 weeks of inventory and face short supply for other types of semiconductor components. At the same time, server shipments are climbing. These factors will raise quotes for the second consecutive quarter. It should be noted that, among suppliers, Samsung has more flexibility in supplying SSDs due to having a higher share of in-house components for this category of storage product. Therefore, Samsung will be dominant in influencing price negotiations over enterprise SSD contracts for 3Q21. In particular, the average contract prices of PCIe 4/8TB SSDs are expected to undergo a 15% QoQ increase in 3Q21, representing the largest price hike among all NAND Flash products for the quarter. 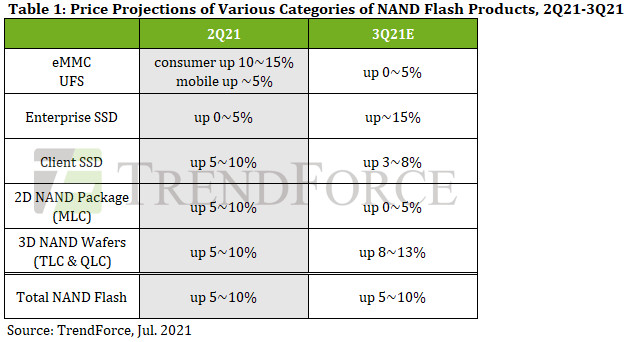 With regards to eMMC products, the demand for consumer products such as TVs and tablets will grow further in 3Q21 because of the effect of the traditional peak season. Additionally, sales of Chromebook devices are still fairly robust. Hence, the demand for eMMC products will remain strong through 3Q21. Nonetheless, the shortage of NAND Flash controller ICs persists as foundries are still operating at a fully-loaded capacity. Furthermore, eMMC production relies on older process technologies. Therefore, low- and medium-density eMMC products are still in limited supply, and contract prices for this category of storage products are expected to keep climbing. It should be pointed out that low-density eMMC products already underwent a considerable price hike that bordered on what the purchasing side considered unacceptable in 2Q21, so the room for further price hikes is limited. TrendForce projects that contract prices of eMMC products will rise by 0-5% QoQ for 3Q21.

The recent spread of the COVID-19 pandemic in Southeast Asia has led several smartphone brands (including OPPO, Vivo, and Xiaomi) that manufacture and sell a considerable share of smartphones there to lower their annual production targets. On the other hand, Apple is stocking up on components as it prepares for the release of the next iPhone series. The iPhone-related demand, together with the traditional peak season for retailers in the second half of the year, will sustain the overall smartphone production and the demand for mobile storage, including UFS products. NAND Flash suppliers have shifted their attention to the demand related to data centers and enterprise servers. Their inventories are also at a relatively low level due to the strong growth in the procurement of enterprise SSDs. Additionally, there is the ongoing shortage of controller ICs. Hence, contract prices of UFS products are forecasted to rise again by 0-5% QoQ for 3Q21.

The mining of Chia has been pushing up the demand for high-performance and high-capacity SSDs (i.e., channel-market products) since the second half of April, although the effect of the recent cryptocurrency craze has also been gradually waning. Secondly, the latest wave of COVID-19 outbreaks in India has noticeably impacted domestic sales of memory cards and USB drives. In addition, the demand for channel-market SSDs from the DIY PC market has been constrained as the ongoing shortage of graphics cards affects the production of customized PCs. Finally, memory module houses are unable to increase NAND Flash procurement as well because of the undersupply of controller ICs. The demand for NAND Flash wafers from module houses will become more limited due to the impact of component gaps on the production of finished storage products.

You can join the discussion on Q3's rising flash prices on the OC3D Forums.