Many MicroSD cards have a hard life, especially those that are used in dashcams, doorbell cameras, and other pieces of equipment that are expected to constantly write new data. Eventually, the MicroSD cards in these devices wear out and fail, requiring users to replace these cards and start the torturous cycle anew.

Samsung has just launched a new series of Pro Endurance MicroSD cards, promising users "reliable enterprise-grade NAND flash memory" and the ability to continuously write data for up to 16 years. Just think of where you were 16 years ago, and imagine that a single SD card from Samsung's Pro Endurance range could operate continuously for that timeframe without failure. That's insane!

It has been estimated that Samsung's new Pro Endurance SD cards can last as long as 33 of Samsung's speed-focused MicroSD cards, which are not designed to endure constant re-writing. Samsung's Pro Endurance range is designed to lower the replacement costs of SD cards for high-write devices. Additionally, Samsung has claimed that these MicroSD cards offer protection from water, magnets, X-rays, extreme temperatures, drops, and NAND wearout.

Speed-wide, Samsung's Pro Endurance series MicroSD cards are not the fastest that the company produces, but they still offer users impressive read and write speeds of up to 100 megabytes per second (MB/s) and 40 MB/s, respectively. These MicroSD cards are Class 10 rated and have a video speed rating of up to U3 (UHS Speed Class 3) and V30 (Video Speed Class 30). These speeds are reportedly ideal for 1080p and 4K video recording and playback. 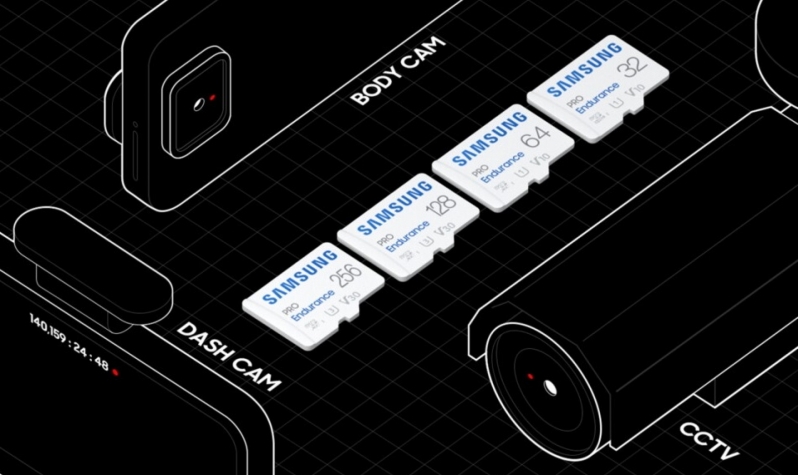 "From CCTV to doorbell cameras, the need for long-lasting and high-performing video surveillance solutions is continuing to increase, and the PRO Endurance has been designed to support that demand," said KyuYoung Lee, Vice President of the Memory Brand Product Biz Team at Samsung Electronics. "Both consumers and enterprise users can rest assured that our new memory card will ensure continuous recording at high resolution even under extreme conditions." Built with Samsung's highly reliable enterprise-grade NAND flash memory, the PRO Endurance card can deliver up to 16 years (140,160 hours) of continuous recording time to ensure every critical moment is captured. This means a single PRO Endurance card can last as long as up to 33 typical speed-focused cards, saving frequent replacement costs and providing greater reliability for always-on video monitoring. 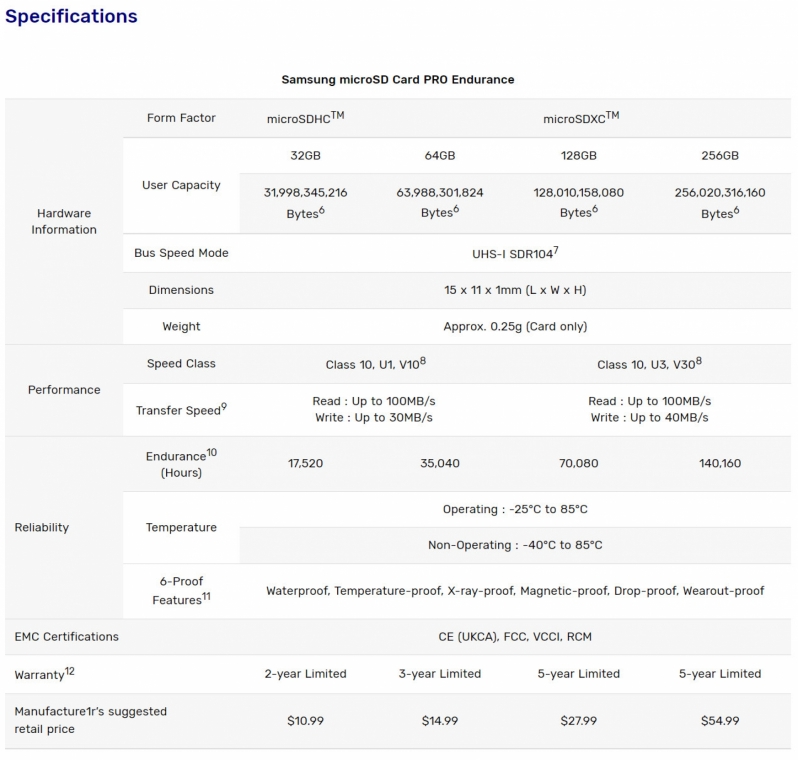 Samsung's new memory card also offers read and write speeds of up to 100 megabytes per second (MB/s) and 40 MB/s, respectively, and is rated Class 10 with video speed ratings of up to U3 (UHS Speed Class 3) and V30 (Video Speed Class 30). This makes it ideal for handling large, high-resolution files while enabling seamless recording and playback in Full HD and 4K.

Since outdoor surveillance and body cameras can be subject to harsh environments, the PRO Endurance has been engineered to offer trusted performance in everyday use with Samsung's reinforced six-proof durability. In addition to protection against water, magnets, X-rays and extreme temperatures, the card is now wearout-proof and drop-proof.

You can join the discussion on Samsung's new Pro Endurance series of MicroSD cards on the OC3D Forums.

dazbobaby
Dashcams should be contiguous anyway, so in theory even though they write all the time, a single sector should only be hit once in a blue moon.


Telling the world that they should last 16 years but only offer a 3 year limited warranty, sends a mixed message.Quote
Reply