The PCIe 5.0 era is almost here

PCIe 5.0 SSDs are on the horizon, and it is likely that most of these early next-generation storage solutions will be based on Phison's new PS5026-E26 SSD controller.

Phison has now showcased their new PCIe 5.0 compatible E26 SSD controller in action with Micron 3D TLC NAND, delivering sequential read speeds of over 12,000 MB/s and sequential write speeds of pver 10,000 MB/s. Those speeds are far beyond the limits of today's PCIe 4.0 M.2 SSDs, and march towards the limits of PCIe 5.0, which can deliver speeds of 15,754MB/s (theoretically) using a PCIe 5.0 x4 connection.

Below is a demo showcasing Phison's latest SSD controller in action, though it is worth noting that SSDs based on this controller are months away from launch, and that firmware optimisations and other changes could result in even faster storage speeds. 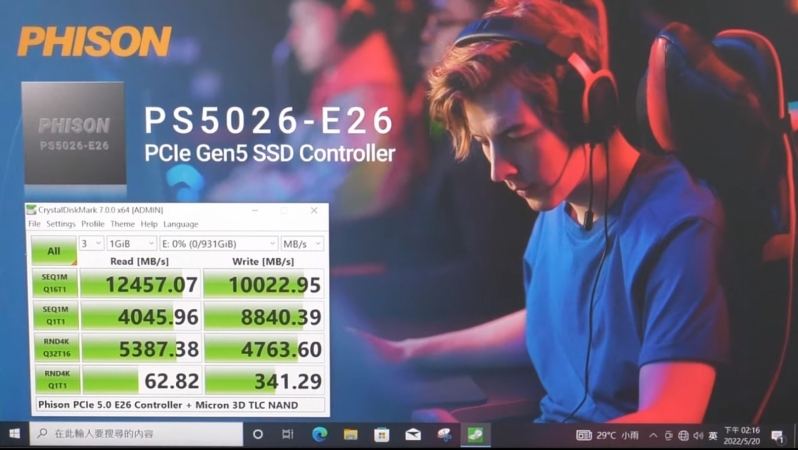 With new technologies like Microsoft's DirectStorage, and technologies that build upon it like Nvidia's RTX IO and AMD's Smart Access Storage, high-speed SSD storage solutions may soon become a lot more useful to gamers and other PC enthusiasts. Software will soon allow gamers to get better use out of their storage hardware, allowing systems to better utilise the speeds of ultra-fast SSDs to enable faster system performance in other areas.

While PCIe 4.0 SSD speeds should remain plenty fast for mainstream users for some time to come, PCIe 5.0 is ready to push things further for those with demanding workloads and those who want to push their system's performance to the limit. PCIe 5.0 storage is coming, and Phison's ready for the transition.

You can join the discussion on Phison's crazy fast PCIe 5.0 SSD demo on the OC3D Forums.