Phison has been teasing their E26 SSD controller for over a year now, a new PCIe 5.0 SSD controller that promises to deliver insane levels of SSD performance using the latest 3D NAND technology.

When AMD launched their Ryzen 7000 series of processors and revealed their PCIe 5.0 compatible AM5 motherboard platform, Phison confirmed that they planned to create the "world's first Gen 5 NVME drives", stating that they had partnered with a large number of manufacturers to create the next generation of SSD storage. Companies that plan to use Phison's E26 SSD controller include ASUS, Corsair, MSI, Gigabyte, PNY, Sabrent, and Apacer.

Now, Phison's planned November 2022 release timeframe for PCIe 5.0 SSDs has passed, though the company has recently confirmed that their E26 SSD controllers had shipped to customers in October. This means that PCIe 5.0 SSDs are coming soon, and that the race is on for with Phison partners to bring their planned PCIe 5.0 products to market. 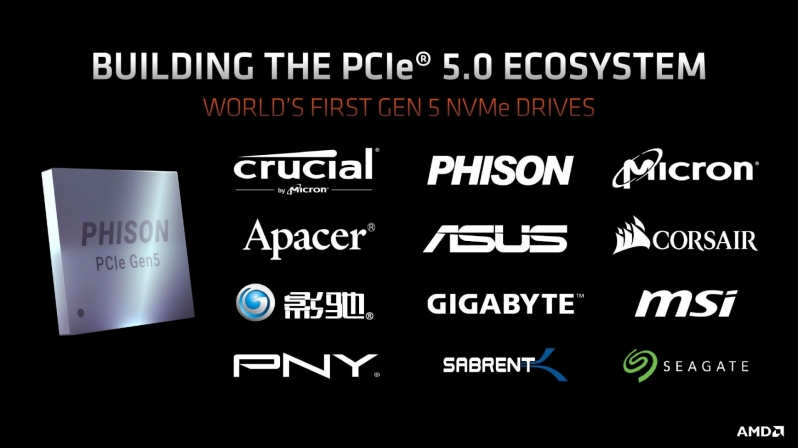 Some Phison E26 SSDs will be NAND limited

SSDs require fast NAND and a fast SSD controller to deliver maximised performance levels, and that means that some SSDs based on Phison's E26 SSD controller will not reach the controller's 12.5 GB/s sequential read speeds. These speeds are only achievable with fast 3D TLC NAND that is capable of 2400 MT/s transfer rates.

Some manufacturers have already teased Phison E26 based SSDs that offer 10GB/s speeds, and these SSDs are expected to feature slower NAND memory. The next generation of ultra fast SSDs will require cutting edge controllers and cutting edge NAND to deliver peak performance.

We expect PCIe 5.0 SSDs to be showcased at CES 2023 by several storage manufacturers, and that means that we can expect to see next-generation storage drives hit the market in early 2023.

You can join the discussion on Phison's PCIe 5.0 SSDs being late to market on the OC3D Forums.