Samsung confirmed that they were making a TLC version of its industry leading 3D V-NAND. The flash has the same 32-layer structure their MLC V-NAND, used in their 850 Pro, just with one more bit crammed into each cell.

What Samsung also announced was that they are also making a variant of their flagship 850 Pro SSD using this TLC Stacked NAND in order to provide the market with a similarly performing drive using this cheaper, but still very powerful TLC V-NAND.

The two images below are courtesy of hw.journal.de, they show what we assume to be the production case of the 850 EVO SSD. 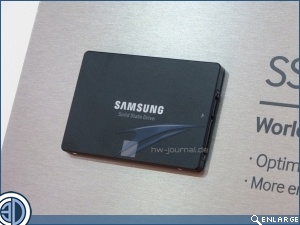 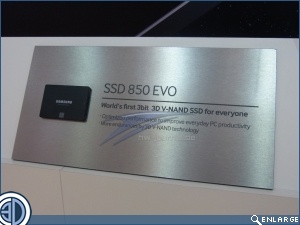 For those who do not know the difference between TLC and MLC NAND, let me explain;

TLC (triple-level cell) flash is a higher density flash which stores 3 bits of information in each cell, which is 1 bit more than the MLC (multi-level cell) flash used in most of Samsungs other SSDs. This gain in storage density is offset by lower write speeds and durability of each individual cell, but these problems can be offset by giving the flash the 3D treatment as vNAND will simultaneously increase the write speeds and the durability of the flash. This makes a 3D, or vertical, TLC Flash highly desirable as its traditional disadvantages are offset by this new technology.

What does this mean to us? It means that Samsung can cram more storage space onto less flash chips without lower write speeds and less durability, which means that they can produce a fast reliable SSD for cheaper than their current 850 Pro and perhaps release a, they can produce the 850 EVO SSD based on TLC vNAND for a reduced price compared to the 850 Pro.

Samsung now have everything they need to not just make the most advanced SSDs on the market, but also potentially the cheapest on the market. So we look forward to seeing what Samsung have in store for us when they eventually launch the 850 EVO SSD.

If you want to discuss the difference in Flash types, or just talk about Samsungs current SSD offerings, please go the the OC3D Forums.

Dicehunter
Quote:
It will be a glorious day when I can have a 1TB drive as my main and 4TB+ drive as my game drive all with SSD's, I'm really looking forward to the future of SSD tech as it comes down in price

barnsley
All SSD is a glorious feeling. Only issue is it makes everything else feel slow.Quote

WYP
Quote:
Indeed the day will be glorious. Also considering that these Drive will saturate SATA 3..... mmmm all that performance.Quote
Reply