Samsung and Xilinx partner up to create the world's smartest SSD

Computational storage is here, and it is a gamechanger!

Samsung and Xilinx partner up to create the world's smartest SSD

This week at 2020s Virtual Flash Memory Summit, Samsung and Xilinx (who were recently acquired by AMD) have revealed their first SmartSSD, a Computational Storage Device which has the potential to change the way that the industry looks at storage.

With their SmartSSD, Samsung is combining their NAND storage with a Xilinx FPGA to accelerate a variety of storage applications, moving database management and processing away from CPUs and placing it directly onto storage mediums. This allows Samsung's SmartSSD to deliver significantly faster storage speeds, higher data compression ratios and allows software developers to create new hardware-accelerated storage solutions.

Samsung's current SmartSSD is a 4TB drive, which can be used to store up to 12TB of data through accelerated transparent compression. This compression can be used to deliver up to 10x more storage capacity in some use cases.

With SmartSSD storage, some applications can be accelerated to offer users significant increases to system performance. For big data analytics, Samsung's  SmartSSD CSD with Bigstream's hyper-acceleration layer allows customers to increase time-to-insight by up to 10x on the Apache Spark unified analytics engine for big data. For search-in-storage operations, the Lewis Rhodes Labs (LRL) applies novel neuromorphic processing with the SmartSSD CSD to accelerate searches by up to 100x, allowing petabytes to be searched in minutes.

Thank to Xilinx' onboard SSD processing, storage overhead is taken away from the user's processor, allowing that performance to be reallocated to other tasks. On the Xbox Series X/S and PlayStation 5, both console manufacturers have already taken similar steps by adding dedicated decompression units to their systems, removing some of the storage overhead from their processors. Samsung and Xilinx' solution does the same thing on a broader scale, offering users more than simple decompression acceleration. 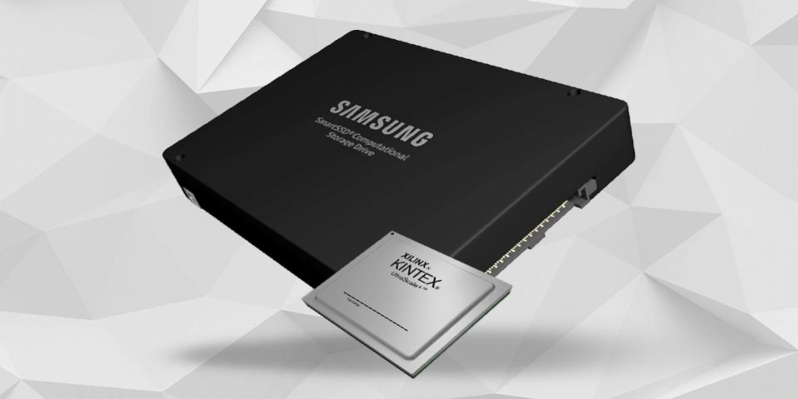 Samsung's SmartSSD will utilise the 2.5-inch U.2 form factor and will launch with a 4TB model. SmartSSD CSDs can be ordered now from Samsung, though general availability is not expected until early 2021.

You can join the discussion on Samsung and Xilinx partnering to create the world's smartest SSD on the OC3D Forums.