Samsung is pushing the PCIe 4.0 interface to its limits

Samsung has invited OC3D over to Gamescom 2022 to see the reveal of their new new 990 PRO PCIe 4.0 SSD, which promises customers huge boosts to both power efficiency and performance over today's 980 PRO model. This not only means that Samsung's 990 PRO will be faster than their older 980 PRO, but that their 990 PRO drives will consume less power and produce less heat than rival PCIe 4.0 SSDs.

Samsung is marketing their 990 PRO SSD towards gamers, content creators, and data analysts, users who demand the highest levels of storage performance. With their 990 PRO SSD, Samsung claims to deliver up to a 55% increase in RANDOM I/O performance over their 980 PRO, and can essentially max out the PCIe 4.0 interface with sequential read speeds of up to 7,450 MB/s.

When testing their new SSD with Forespoken, an upcoming game from Luminous Productions that uses DirectStorage, Samsung claims that their 990 PRO SSD can load the game in around a second, with SATA SSDs taking four seconds and HDDs taking 28 seconds. That means that Samsung's 990 PRO can decrease game load time in an early DirectStorage titles by 4X when compared to traditional SATA SSDs. That's incredible. That said, Samsung did not compare their 980 PRO and 990 PRO in this gaming test. 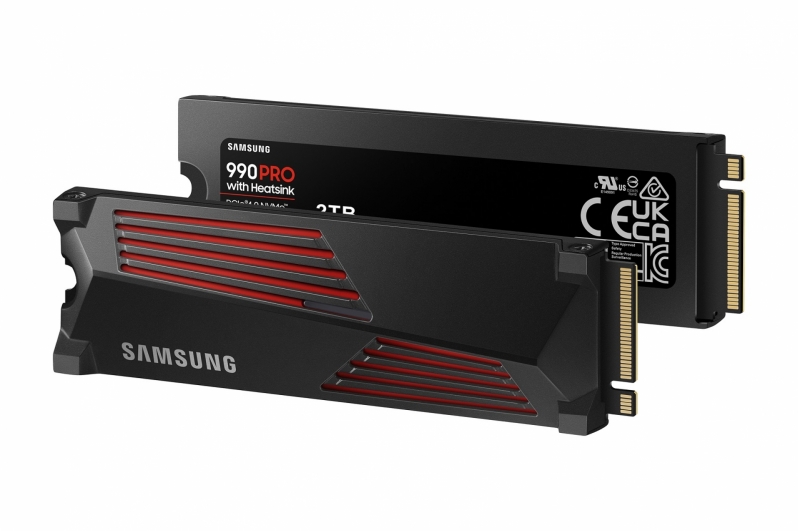 Power-wise, the 990 PRO's new controller offers users up to a 50% increase in power efficiency over the Elipis controlled used in their 980 PRO SSD. This reduction in power draw results in less heat and lower SSD thermals, This change is beneficial for all users, especially those who work their SSDs hard during productivity tasks.

Samsung's 990 PRO will be available worldwide starting this October with the manufacturer’s suggested retail prices (MSRP) of £154.99 for the 1TB model and £283.99 for the 2TB. A 4TB model will become available in 2023. Below are the 990 PRO's specifications and Samsung's Press Release for the SSD.

Thank you Samsung for bringing us to Gamescom 2022 to see your 990 PRO SSD launch. 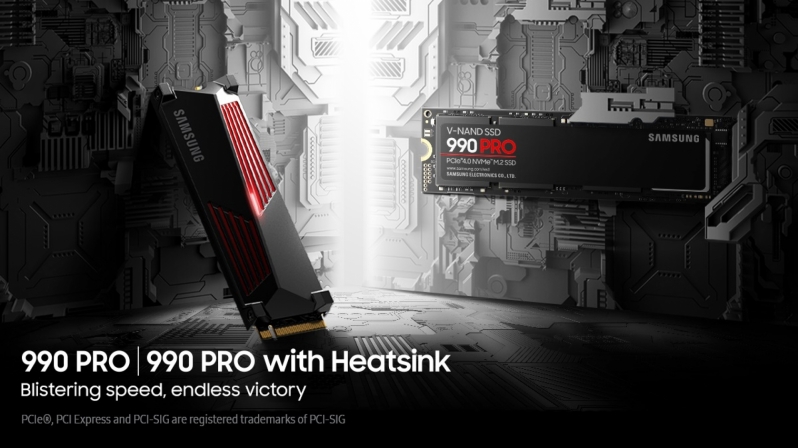 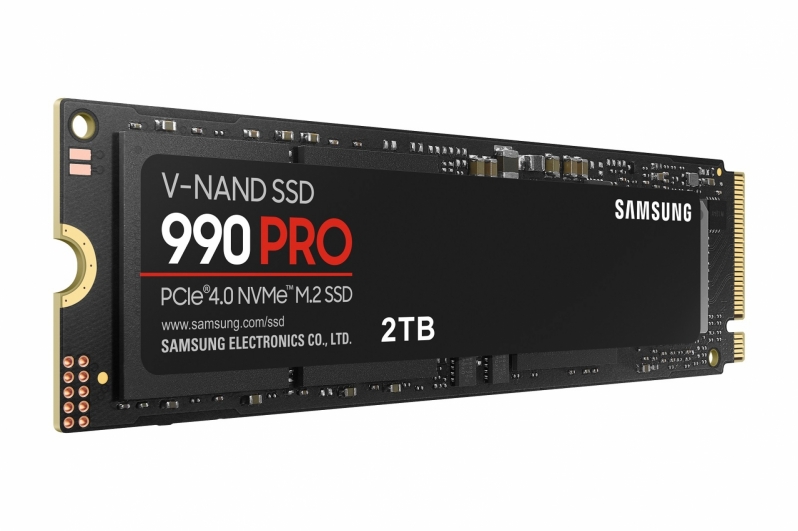 Featuring Samsung’s latest V-NAND and a new proprietary controller, the 990 PRO series offers the highest speed currently available from the PCIe 4.0 interface . The SSD delivers sequential read and write speeds of up to 7,450 megabytes per second (MB/s) and 6,900 MB/s, respectively, while random read and write speeds come in at up to 1,400K and 1,550K IOPS , respectively. With up to a 55% improvement in random performance over the 980 PRO, the 990 PRO is particularly well-suited for heavy gaming as well as creative and productivity tasks.

High-performance NVMe SSDs are also critical in reaping the full benefits of the latest game console and gaming technologies. Powered by NVMe, the 990 PRO brings faster loading times to PCs and consoles for a more immersive gaming experience. When tested with Forspoken , Luminous Productions’ forthcoming action role-playing game supporting the latest game-loading technology, the map loading time was about one second, compared to four seconds for a SATA SSD and 28 seconds for a hard disk drive (HDD). 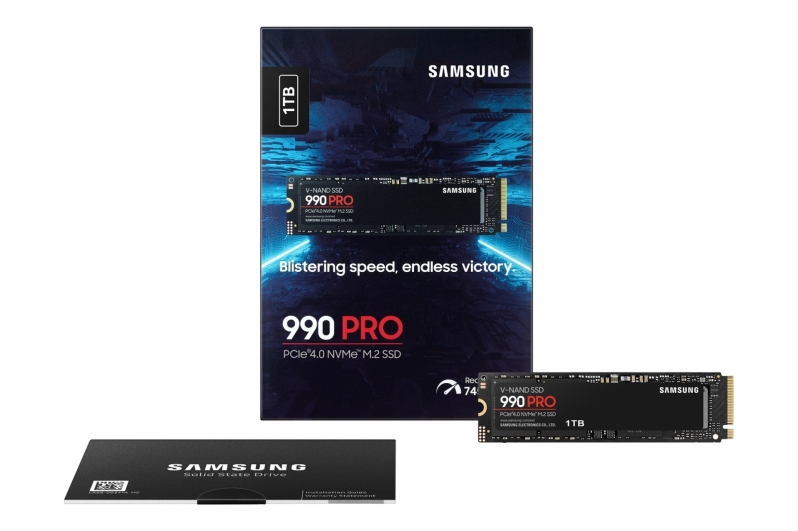 Built on a low-power architecture, Samsung’s newly designed controller dramatically improves the SSD’s power efficiency by up to 50% compared to the 980 PRO. Additionally, the 990 PRO employs a nickel coating on the controller and a heat spreader label on the drive for reliable thermal management. Samsung’s Dynamic Thermal Guard technology further ensures that the drive’s temperature stays in the optimal range.

The 990 PRO with Heatsink version offers an additional layer of thermal control while its RGB lights add more style to the drive.

Samsung’s 990 PRO is also an excellent solution for laptop and desktop upgrades as well as for build-your-own PCs, providing a significant performance boost while using less power for increased battery life and thermal management.

The 990 PRO will be available worldwide starting this October with the manufacturer’s suggested retail prices (MSRP) of £154.99 for the 1TB model and £283.99 for the 2TB. A 4TB capacity version will become available from next year.

You can join the discussion on Samsung's new 990 PRO SSD on the OC3D Forums.

NeverBackDown
Damn that's going to be expensive. Converted about $182 for the 1TB drive and $384 for 2TBQuote

AlienALX
Quote:
Yeah it's sad that it seems like there's this solid state carrot that has been dangled in front of people for years now, with every gen saying that they have found a cheaper way to make the NAND etc. Yet they never seem to get cheaper, and they always seem to find a way to keep prices high FFS.

Seriously, I have been on SSDs since 2008. You really would have thought that by now spinning drives would not even exist, aside from in server rooms.Quote

Avet
Quote:
This is their flagship consumer product. It will be expensive no matter what. Until windows stops using SSD drives just like a super fast HDD and until we see actual performance gains from DirectStorage any decent NVME with DDR cache is as good as this one.

And if you really want to spend money on a flagship product go and buy Intel 905p. It is, and will be for a long time, the second fastest NVME for mortals. And will blow out of the water all Gen 5 10K+ drives for every single thing you do on your PC.Quote

stereotype
I really don't understand why they decided to put out a PCIe gen4 product in late 2022.

It's been 2 years since the 980 Pro was released. I really hoped, after this amount of time, with Intel already having a PCIe gen5 capable platform out and AM5 following soon, Samsung's next generation SSD would be PCIe 5.0. But instead they're bringing out this lame duck.Quote

Avet
Quote:
Because it doesn't matter. None of the apps or games can properly use Gen3 let alone Gen5. Windows and apps treat any SSD only as a super fast HDD. It is up to the SSD controler to optimize NAND function and present the drive as HDD to the system. At the moment, and probably also in the next year or two, you will get very noticable speed boost in every task buy using "slow" 2500 MB Gen3 Intel 905p over any "super, mega, giga, uber fast" 10000+ MB Gen5 drive. Those mega speeds are QD32 sequential which you pretty much never use in any task.Quote
Reply