Samsung has officially revealed its 980 PRO series SSD, what is now the world's fastest consumer-grade PCIe 4.0 SSD. On its Singapore website, Samsung has listed 1TB, 500GB and 250GB models of its 980 PRO SSD, promising sequential read speeds of 7,000 MB/s, smashing the 5,000 MB/s speeds of today's other PCIe 4.0 offerings.

Using the bandwidth offered by PCIe 4.0, Samsung has delivered a 2x performance improvement over the company's existing PCIe 3.0 offerings, providing a true generational leap in storage performance. Samsung claims that its PCIe Gen4 SSD can offer a 2x performance boosts over PCIe Gen3 SSDs and performance levels which are 12.7 times faster than SATA SSDs.

Note that Samsung's 980 PRO SSD will only reach its rated speeds when paired to PCIe 4.0 compliant systems, such as PCs powered by an AMD Ryzen 3000 series processor and a PCIe 4.0 compatible motherboard.

At this time, Samsung has not revealed the pricing or release date of their 980 PRO SSD.

You can join the discussion on Samsung's 980 PRO PCIe 4.0 SSD on the OC3D Forums. 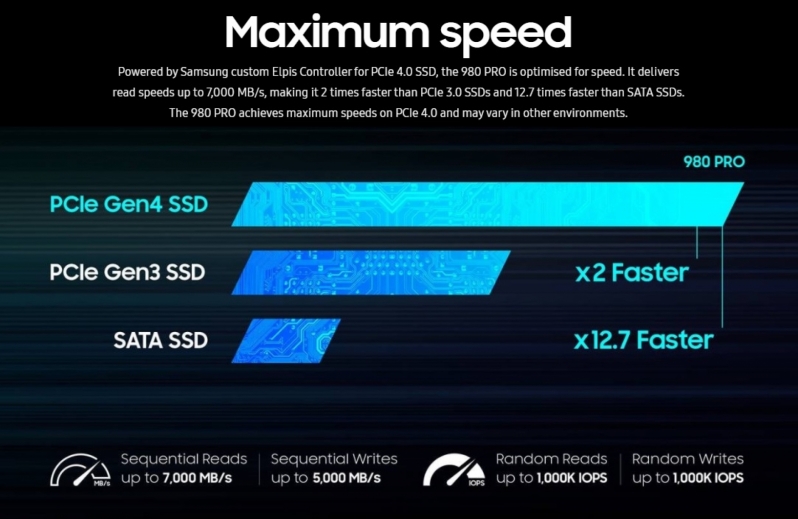 Dawelio
It's nice with innovation and when companies are pushing the boundaries.

Although this is unfortunately not something you'll notice on a day to day basis, with normal usage.Quote

NeverBackDown
You'd notice it in a PS5. These speeds will be required.

I'm shocked at no 2TB model with more memory. I think it would be quite popular for ps5Quote

Warchild
Quote:
Perhaps they will come in near future. Could be the model was not up to performance levels for release yet.Quote


That said....I will wait for the EVO series of this. Better value for the money.Quote

Avet
While I am super excited for new releases ADATA SX8200 Pro is the only NVME most of the people will ever need.Quote
Reply