Samsung's getting ready to enter the consumer PCIe 4.0 SSD market, delivering their 980 Pro SSD to the masses with speeds which exceed all existing consumer-grade SSDs.

It has been confirmed that Samsung's 980 PRO SSD has passed through Sout Korea's NRRA, a body of regulators which certifies electronics. The Reddit user wickedplayer494 first spotted this listing, and the Korean listing confirms that 250GB, 500GB and 1TB models of Samsung's 980 PRO are planned.

These SSD speeds will require a PCIe 4.0 compatible systems, making the 980 PRO's full performance only available on AMD Ryzen 3rd Generation systems at launch. Intel users will have to wait for PCIe 4.0 complaint processors. 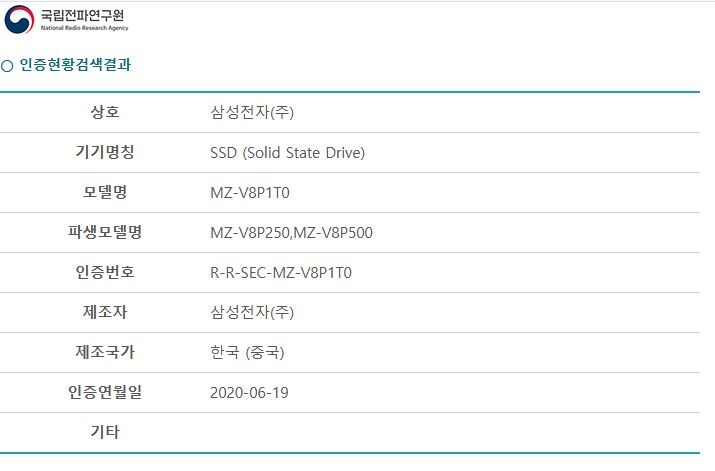 You can join the discussion on Samsung's 980 PRO SSD on the OC3D Forums.

Bagpuss
Whilst the headline 6.5Gb/s figure may allow the claim of 'Faster than a Playstation 5!' in reality, without the dedicated, custom hardware I/O chips of the PS5 doing their magic, I'm guessing they will still be slower for PC games.Quote

Linchpin
Wonder what the price is going to be, won't be shocked if the 1TB model costs nearly as much as an entire console.Quote

Especially in the ps5. An extra 175GB of storage and same performance for likely over $400? Not worth it. Unfortunately that'll also be the norm as ssds get larger and faster that would be compatible with the ps5.

Mine as well buy another console for barely more and just game share on it at that point with a guarantee it'll work.Quote

Scarelin
Quote:
You can buy a 1TB Gen4 SSD with the same Phison controller for under 200USDQuote
Reply