As we discussed last month (link), Samsung's creating a heatsinked 980 PRO SSD model that officially supports Sony's PlayStation 5 console. This new model is designed to run cooler than its standard, heatsink-less counterpart, though these new SSD models will also benefit from "new firmware enhancements" from Samsung.

Samsung's new "980 PRO with Heatsink" SSDs are due to launch on October 29th with 1TB and 2TB models, which will ship with MSRP prices of $249.99 and $449.99, respectively. These SSDs also features a five-year warranty.

This new 980 PRO model uses Samsung's proprietary built-in heating, which features "Samsung Advanced Heat Dissipation Technology". This SSD is designed with PlayStation 5 in mind, ensuring that their drive can maintain optimal temperatures and sustained performance when used within Sony's PlayStation 5 console. This drive is designed to allow PlayStation 5 owners to play games using the drive for hours without fears of performance degradation, thermal throttling, or additional fan noise. 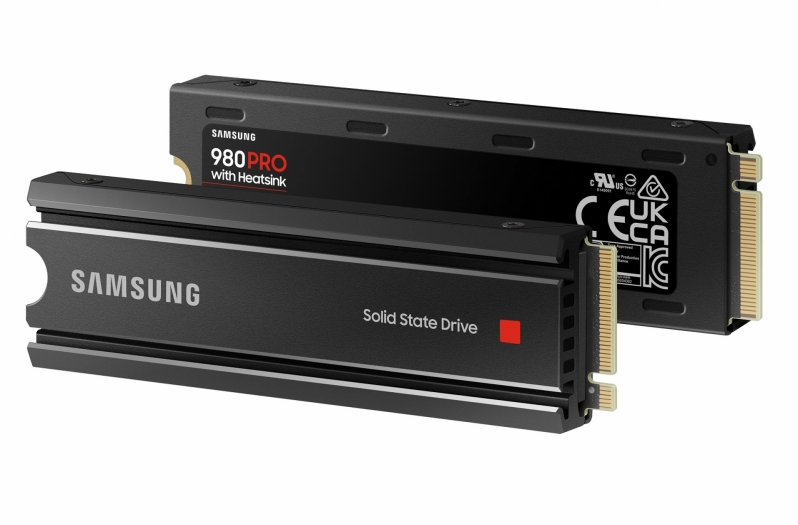 With sequential read speeds of up to 7,000 MB/s, Samsung's SSD is more than fast enough to exceed Sony's 5,500 MB/s PlayStation 5 storage speed requirements. Beyond that, this drive's pre-installed heatsink allows it to be installed with minimal effort, allowing PS5 users to install an SSD without researching compatible heatsinks for heatsink-less M.2 SSDs, or installing 3rd party heatsinks on delicate M.2 SSDs.

Below is what Samsung had to say to us regarding its 980 PRO SSD with heatsink.

Today, Samsung Electronics America announced its popular Samsung 980 PRO SSD will be available for purchase in a heatsink model, the Samsung 980 PRO with Heatsink, starting October 29, 2021 – just in time to bring “more play” to the PlayStation®5 (PS5) console this holiday season.

Ready for installation in a slim, PS5-compatible design, the 980 PRO with Heatsink enables gamers to easily expand storage on their console. This addition to the Samsung 980 PRO SSD family is delivered with a proprietary built-in heatsink with Samsung Advanced Heat Dissipation Technology and new firmware enhancements. The power-efficient 980 PRO with Heatsink is optimized to deliver sustained, blazingly-fast performance while maintaining optimal temperature when used in the PS5 – thus enabling PS5 console owners to play games from the SSD for hours without worrying about performance degradation or thermal throttling, or distracting unnecessary fan noise.

You can join the discussion on Samsung's 980 PRO SSD with Heatsink on the OC3D Forums.